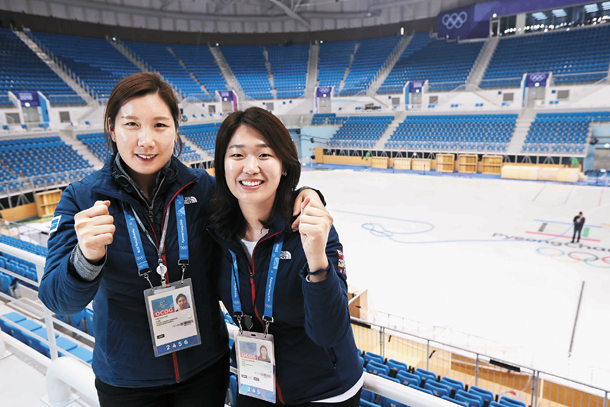 Former short-track speed skaters Byun Chun-sa, 31, and Ko Gi-hyun, 32, shout “fighting!” at the Gangneung Ice Arena in Gangwon on Jan. 16 after their interview with the JoongAng Ilbo. The pair is in charge of managing events for the upcoming PyeongChang Olympics. [OH JONG-TAEK]

Once hailed as Olympic heroes for sweeping up gold medals, two former short-track speed skaters now spend their time working behind the scenes.

Byun Chun-sa, 31, won gold in the women’s 3,000-meter relay at the 2006 Turin Winter Olympics, while Ko Gi-hyun, 32, bagged gold in the women’s 1,500-meter event at the 2002 Salt Lake City Olympics. Now, they work outside the rink as sports administrators for the PyeongChang Committee for the 2018 Olympic and Paralympic Winter Games (Pocog), with Byun in charge of short-track speed skating and Ko managing the snow facilities department.

The pair sat down for an interview with the JoongAng Ilbo, an affiliate of the Korea JoongAng Daily, on Jan. 16 at Gangneung, Gangwon, one of the three venues for the Games, to explain why they chose to be sports administrators and share memories of their lives before retirement from skating.

“At her height, Byun was an all-around star player who led in both short- and long-distance relays,” said Ko. “I met Byun in elementary school when we were selected for the national team. Her skills were not bad.”

Byun said she used to observe and emulate Ko’s moves, which seemed like they were straight out of a “short-track speed skating textbook.” But after retiring in 2011, Byun said she “contemplated what to do,” adding, “I tried coaching children for a short time, but I didn’t feel like I was doing anything significant.”

So she flew to the United States to study abroad and learn English. Upon her return, she saw an opening for a position to head short-track speed skating under Pocog. “I wanted to support the Winter Games, which were going to take place in our country,” Byun said. “So I decided to apply for the position.”

In her current role, Byun orders all the necessary equipment for the Games and manages human resources. She has contributed to the design of the arena and used her experience as a professional athlete to create the layout of the dressing room.

“Before the ice arena was constructed,” said Byun, “it was literally a patch of grass. There were chickens running around here and there.” The former skater consulted various architects and construction workers to create the site and even skated on the rink after its construction for quality assurance. “I wanted to make it so the athletes could immediately ice themselves after stepping off the rink.”

Byun has worked incredibly hard to ensure everything is in order. “I wake up at six every morning and to work all day,” she said, adding that she fears if she falls behind others, people will say it’s because she used to be an athlete and therefore isn’t smart enough to handle administrative work. “I lost five pounds without even realizing. This one time, my phone was broken so I had to go to the store to get it fixed. The employee there told me, ‘Your call log is overflowing. What kind of work do you do?’”

Byun said she receives over 3,000 minutes of calls on average every month.

Like Byun, Ko said she also faced a career dilemma before coming to work for Pocog.

“When I was a professional athlete, I had no interest in becoming a coach,” she admitted. “After graduating college, I prepared to become a [sports] administrator.”

She began working for the Seoul Sports Council, then Special Olympics Korea and the Korea Skating Union, until finally landing with Pocog, where she is in charge of handling all events at the Gangneung venue and managing short-track and figure skating.

But also like Byun, the transition to where she is now hasn’t been an easy one. “When I messed up as an athlete, it was on me,” said Ko, “but if I make a mistake managing the facility now, then I mess up the image of PyeongChang as a whole. That’s why I try even harder to be meticulous and stay focused.”

Their dream, they say, is to continue their role as sports administrators for upcoming events. “I hope to continue my role in this field for the 2022 Beijing Games,” said Byun. Ko, on the other hand, expressed her desire to become a member of other committees for international sports events.

Another former athlete who now works behind the scenes at PyeongChang is former ski jumper Kim Heung-soo, 38, who was part of the first national ski jumping team, which later became the subject of the 2009 box-office hit “Take Off.”

Kim now manages the ski jump and Nordic combined sports under Pocog. Table tennis player Ryu Seung-min, who won gold at the 2004 Athens Summer Olympics, is the newly appointed head of the athlete’s village in Pyeongchang.

Former short-track speed skater Kim Ki-hoon, who won gold at the 1994 Lillehammer Olympics, will also head to the athlete’s village to help athletes prepare for the Games.