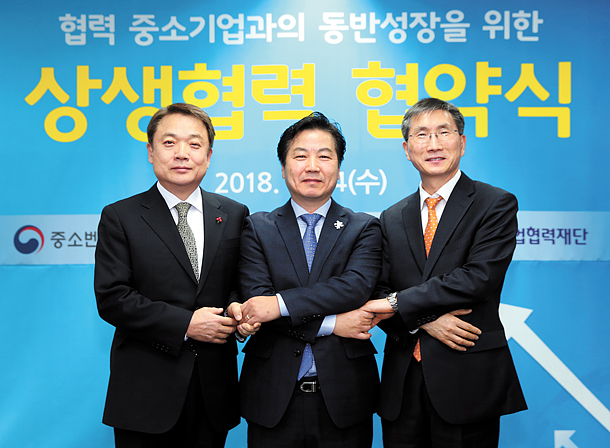 From left, Chung Jin-haeng, the president of Hyundai Motor Group, Hong Jong-haak, the minister of SMEs and startups, and Kim Hyung-ho, the secretary general of the Korea Foundation for Cooperation of Large and Small Businesses, Rural Affairs, pose for a photo after signing a memorandum of understanding on Wednesday in Seoul. [HYUNDAI MOTOR]

Hyundai Motor Group is contributing a sizable amount of money to support its contractors amid rising labor costs after the recent minimum wage hike, the second conglomerate in Korea to make such a commitment.

Hyundai, the world’s fifth largest automaker by sales, announced on Wednesday that it signed a memorandum of understanding with the Ministry of Small and Medium-sized Enterprises (SMEs) and Startups to aid its parts suppliers. In particular, the company said it will create a 50 billion won ($47 million) fund to relieve its second- and third-tier contractors of the burden that stems from the hourly wage increase, all of which will be spent by the first half of this year.

The Moon Jae-in administration increased the minimum wage by some 16 percent to 7,530 won this year, which went into effect as of Jan. 1. It was the biggest jump in the past two decades. The average increase from 2015 to 2017 had been in the 7 percent range. President Moon vowed that he will push up the legal hourly wage to 10,000 won by 2020, which would require more than a 16 percent jump over the next three years.

The sudden surge in the legal minimum wage means more labor costs and small and medium-sized businesses have expressed their concerns as they are especially vulnerable to the change. As a result of mounting concerns, the government rolled out a series of efforts to aid companies hit hard by the hike, including a reduction in the employment insurance that they have to pay to the government.

Hyundai Motor Group, which has Korea’s top automotive companies - Hyundai Motor and Kia Motors - under its wing, has some 300 top-tier contractors and about 5,000 second- and third-tier parts suppliers that it works with. A spokesperson from the company said they decided to target the latter group, as the company already has a number of systems in place to support top-tier contractors.

Hyundai is also allocating another 100 billion won to provide loans to parts suppliers at an interest rate as much as two percent lower than the market average.

The company’s decision to lend a hand to its suppliers comes a week after Kim Dong-yeon, the Minister of Strategy and Finance, held a meeting with executives of the company and asked them to help their contractors with the rising labor costs.

The group is the second company after Samsung Electronics to devise a plan to help out its contractors.

Earlier this week, Samsung decided to raise the unit price of parts supplied by its contractors by the same amount as the rise in costs due to the wage hike.

The company will receive applications from some 600 contractors and provide aid to qualified companies. The size of the aid is yet to be determined.

“Collaboration between large companies and SMEs is a plausible solution to the problems of low growth and the polarization of wealth that the Korean economy is facing today,” said Hong Jong-haak, the minister of SMEs and startups, on Wednesday.

With Samsung and Hyundai both announcing measures to assist their contractors this week, other large companies are starting to feel the pressure.

“[Other companies] are walking on eggshells, not to mention the subtle pressure from the government” said an industry source. “Just last year when the government announced it will raise the minimum wage, conglomerates didn’t think it would affect them much, but the situation has changed dramatically now.”

SK Group is reportedly in the process of figuring out the cost burden on its contractors because of the wage increase. In the case of LG Group, its subsidiaries are likely to come up with their own measures as the contractors they work with cover a large number of industries due to the diversity of the group’s businesses.