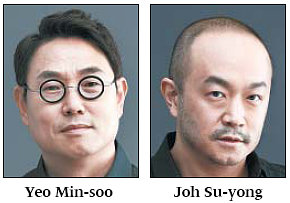 Kakao, operator of the country’s most popular chat app KakaoTalk, announced that its current heads of advertising and branding will replace CEO Jimmy Rim.

The company explained the management change is meant to “create synergy” among different business units and partners and propel growth.

The company will be led by co-CEOs; Yeo Min-soo, 48, executive vice president of advertising, and Joh Su-yong, 44, head of Kakao Brand Center and chief creative officer.

Yeo, an advertising expert, joined Kakao in August 2016 and is responsible for introducing digital marketing strategies that meet mobile and artificial intelligence-related businesses.

Kakao’s advertising platform, which Yeo launched late last year, was well received by both users and clients with its focus on personalized content, contributing to revenue growth. Before joining Kakao, Yeo worked for Naver, eBay Korea and LG Electronics.

An industrial designer, Joh was in charge of designs at the early stage of Naver, the top portal operator - he was responsible for Naver’s signature green search window, among other things - and has been running his own brand consulting firm JOH since 2010. JOH is best known for publishing Magazine B and running the now-closed Second Kitchen in Hannam-dong, central Seoul.

Their appointment will be confirmed at shareholders’ and board of directors’ meetings scheduled in March.

The leadership change marks the second phase of Kakao, which merged with Korea’s No. 2 portal operator Daum Communications in October 2014. Rim, 38, took the helm of the company in September 2015 as he assumed the grave challenge of building a new business model that could capitalize on its enormous number of users, now standing at 42 million.

The young CEO headed investment at K Cube Ventures, an investment arm of Kakao, before taking the CEO post. Rim will be assuming the role of “future strategy adviser,” a part-time post, for the time being. He has yet to unveil his post-Kakao plans.

Although a Kakao spokesman said the CEO “tendered his resignation,” his early departure in March - before his three-year term is completed - was not a complete surprise to market insiders. Rim’s time at the top has suffered due to the low profits generated by the on-demand services that he championed including Kakao Taxi and Hairshop.

Industry observers say Kim Beom-soo, chairman and the biggest shareholder of Kakao, has made a strategic choice to name seasoned experts as CEOs in the hope of streamlining the increased number of affiliates under the Kakao umbrella while taking a more aggressive move to actually make money.

Kim is one of the co-founders of Naver, formerly NHN, in 2000, and both Yeo and Joh gained Kim’s trust while both of them were serving at the Kakao rival.

“Our focus will be to offer new connections through technology and service, grow with our partners and create a more convenient and joyous world,” Yeo said in a statement after the announcement.

“Just as we blazed the trail for Korea’s mobile industry, Kakao will work harder so users throughout the globe can experience the unique values offered by our services and brands,” Joh said.