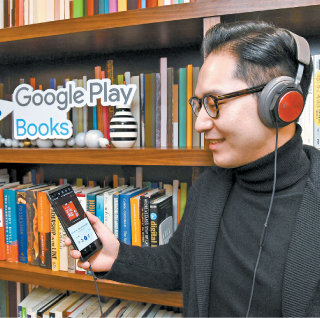 Jae Kwon, a manager for Google Play’s global product partnership, shows how to use an audiobook on Wednesday. [GOOGLE PLAY]

The app store Google Play starting offering audiobooks in 45 countries including Korea on Wednesday. The books are read in nine languages, including Korean and Japanese.

The audiobooks are not an independent app, but content that can be directly purchased. Users can get access to books in Korean and other languages, including some offered free of charge.

“Audiobooks are content that can become part of our daily lives - when we commute to work, drive or do household chores like cooking,” said Jae Kwon, a manager for Google Play’s global product partnership.

The length of the books vary: Children’s books can be as short as 10 minutes, while self-motivation books typically last around two hours. Each audiobook is advertised with the name of the author, narrator, the length and date of update.

Many of the offerings, particularly from the business or self-help sections, are excerpts from original books. Some are key chapters instead of the entire book.

“If a book is fully recorded into an audio version, the length will be around 13 or 14 hours - which we don’t think ordinary people will be willing to afford in terms of time or money, as a longer length means a higher price,” said Kwon Oh-jun, leader of the content business team at Audien, Google Play’s local partner for providing audiobooks. “That’s why we’re mainly sticking to two-hour productions.”

Established in 2006, Audien has made more than 10,400 Korean audiobooks so far and is adding 100 each month. Many can be found on Google Play.

The audiobook market in Korea is still in its infancy compared to the United States, which has been growing at 20 percent annually for three years through 2016, according to data from the Audio Publishers Association.

Kwon said the perception of audiobooks in Korea is changing as ordinary people show interest to entertain themselves while commuting. In the past, it was considered a segment for the hearing-impaired.

“According to user surveys, a majority of audiobook customers were fans of particular narrators in the past,” said Kwon. “But now we’re getting more customers who say they simply want to enjoy a book, or use it as a way of killing time on a commute.”