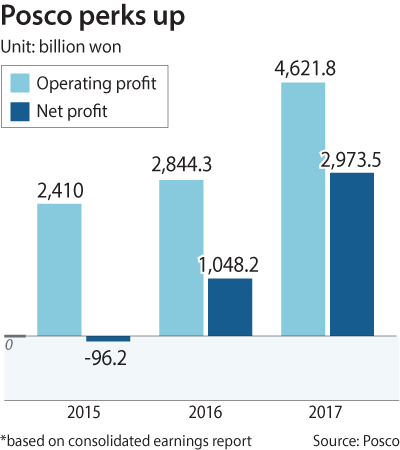 Net profit at Posco, Korea’s largest steelmaker, more than doubled last year on higher earnings from its non-steel businesses, improved performance at its foreign affiliates and sale of investment securities, the company told analysts in a call Wednesday.

The boost in non-steel mostly came from Posco Engineering & Construction and Posco Energy, a power company. In 2016, both affiliates posted net losses, but Posco said the construction company was able to turn around losses from foreign projects through favorable returns in residential apartment projects, while Posco Energy saw profit thanks to a price increase in electricity. According to Posco, operating profit from non-steel businesses increased from 12.9 billion won in 2016 to 1.09 trillion won last year.

The positive report lowered Posco’s debt ratio by 7.5 percentage points its lowest since 2010, at 66.5 percent.

For the past four years, the steelmaker has been under a tight turnaround plan to improve its financials. Over the years, the company has completed 150 streamlining projects, including mergers, sales and disposal of investment securities.

The investment will largely be spent on industries with high potential, such as electric car battery production and smart factory construction.

Last February, Posco completed a factory in Korea to produce lithium carbonate, a material used in rechargeable lithium-ion batteries, and hopes to expand its presence in the highly promising electric vehicle market.

Among its first major moves of the year, Posco inked a partnership with Huayou Cobalt on Wednesday to set up two joint ventures in China.

One will produce cathode materials, crucial components in lithium-ion batteries. Posco will own 60 percent and Huayou 40 percent.