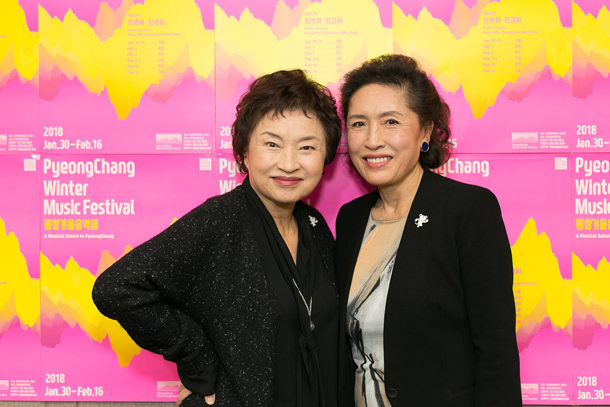 Chung Kyung-wha, left and Chung Myung-wha, right, the two artistic directors of the PyeongChang Music Festival and School, announced Wednesday that they’ll step down from the post after completing the winter edition of the festival, which kicks off on Jan. 30. [PYEONGCHANG MUSIC FESTIVAL AND SCHOOL]

Cellist Chung Myung-wha and violinist Chung Kyung-wha, the two artistic directors of the PyeongChang Music Festival and School and its winter edition, the PyeongChang Winter Music Festival, announced Wednesday that they’ll step down from their posts after the winter music festival that will be held both in Seoul and Pyeongchang in Gangwon on Jan. 30.

“We’ve achieved so much and after this Winter Music Festival, we’ll focus on performing outside Korea as we believe it’s the best way to let the world know about the level of classical music in Korea,” said Kyung-wha.

Kim Seong-han, director of the Gangwon Art & Culture Foundation, which has been organizing the two festivals, said they are not sure at this point who will be named the next artistic director, but they’ll definitely hold the PyeongChang Music Festival and School this summer as “the legacy of the Winter Olympic Games.”

However, Kim added that he is unsure if the winter edition will continue after this year.

The PyeongChang Music Festival, formerly called the Great Mountains Music Festival and School, began in 2004 in an attempt to bring the Olympics to Korea. Its winter edition began in 2016 to help put Pyeongchang in the spotlight prior to the 2018 Winter Olympics. The Chung sisters have lead the festivals since 2011.

“We’ve put all of our efforts into bringing this festival up to the international standard that we have today,” said Myung-wha. “When we go abroad to perform, musicians from all across the world complement the festival and say that they want to be invited.”

One of the most worthwhile moments, she added, will be watching about 20 students, who used to receive lessons from musicians at the festival’s summer school, grow up to become internationally renowned musicians and participating as performers at the festival.

“Some may ask what classical music has to do with the Winter Olympics,” said Kyung-wha, “but music can’t be left out when talking about peace and harmony.”

For the upcoming PyeongChang Winter Music Festival, the organizers decided to bring the festival to Seoul. On Jan. 30 and 31, there will be two concerts at the Seoul Arts Center in southern Seoul, and then the festival will move to Gangwon, where it will hold performances until Feb. 16.

PyeongChang Music Festival has become known for dynamic classical music performances by staging other classical genres together with music, like ballet and even Korean traditional music genre pansori (narrative singing). This year will be no exception.

On Jan. 30 at the Seoul Arts Center, classical chamber musicians will perform together with ballet dancers Kim Yoo-mi and Brandon Hilton. Myung-wha will play the cello and Kim Tae-hyung will be on the piano to accompany the two dancers.

Listed on the program is also the world premiere of “PyeongChang Heung-Bo-Ga,” written for the festival by composer Lim Jun-hee. Veteran pansori singer Ahn Sook-sun will perform together with Myung-wha on the cello and Kim on the piano.

“To wish for the successful Winter Olympic Games in Pyeongchang, I wrote the piece based on Heungboga, one of the five [traditional] pansori, to emphasize the love between the two brothers,” said Lee. “Unlike my previous piece for pansori and a cello, this one includes traditional rhythmic beats by adding janggu [a Korean traditional percussion instrument].”

There will also be some free performances during the festival, including a collaboration performance between the Wonju Philharmonic Orchestra and the Mariinsky Choir at 7:30 p.m. on Feb. 2 at the Wonju Baekun Art Hall in Wonju, Gangwon. A jazz concert titled “Korean Breath” at the PyeongChang Festival Park on Feb. 10 and a classical concert by violinist Kyung-wha and pianist Son Yeol-eum together with the Tongyeong International Music Festival Ensemble under the baton of Sung Shi-yeon, at the Gangneung Arts Center will also be free.