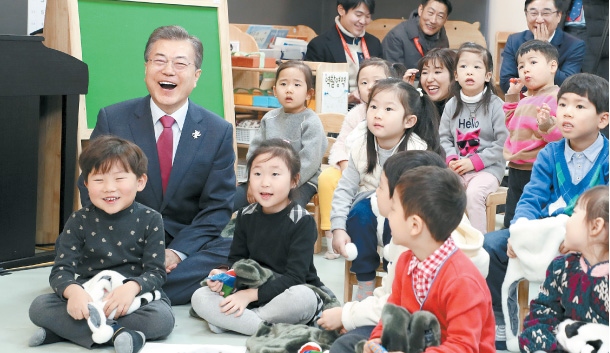 President Moon Jae-in, left, chuckles while watching a magic show with children at a day care center in Dobong District, northern Seoul, on Wednesday. Moon promised to greatly expand government support for parents with young children in a meeting with parents at the day care center. [YONHAP]

President Moon Jae-in promised to greatly expand government support for parents with young children Wednesday, vowing to more than triple the proportion of infants and kids nurtured at public centers within his presidential term.

The renewed pledge came during a special visit to a public child care center in Seoul.

“The government will have to do many things in the child care sector,” the president said while meeting with children and parents at a day care center in Dobong District, northern Seoul, “but the most urgent task may be to increase the proportion of children using national and public kindergartens and child care centers. It has set a goal to increase that proportion to 40 percent during my term.”

The proportion stood 12.9 percent at the end of 2017, according to the Blue House. The Moon Jae-in government added 373 new public day care centers in just seven months since its inauguration in May, and plans to build 450 new centers each year over the next four years, the president noted. Moon’s single five-year term ends in May 2022.

To this end, the government has earmarked over 8.76 trillion won ($8.18 billion) for child care alone this year, up more than 230 billion won from the previous year, Moon said, noting the 2018 budget for child care nearly equaled the country’s entire annual budget of the early 1980s.

Efforts to increase the number of children at public day care centers is partly aimed at boosting the country’s birthrate, the presidential office said in a press release.

Korea’s birthrate has remained one of the world’s lowest for years, with high costs of living and child rearing often pointed to as two of many causes.

“The main objective of the child care policy,” the Blue House said, “is to support healthy growth and development of young children while also supporting the coexistence of both work and life of their parents.”