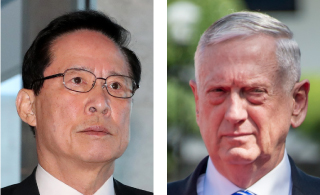 The meeting will be held on Song’s request, contradicting an earlier report from Japan’s Asahi Shimbun that the U.S. asked South Korea last Sunday for a meeting on military talks.

On Monday, Choi Hyun-soo, spokeswoman of the National Defense Ministry, told a local press briefing that the two military chiefs agreed in a telephone conversation on Jan. 4 to discuss bilateral issues “often, if circumstances allow.”

The venue of the talks will be Hawaii, according to one government source. Mattis will be visiting the U.S. Pacific Command headquarters, which is on the island, around that time.

The main topic is expected to be how North Korea’s participation in the PyeongChang Games affects regional security, and how Seoul and Washington will react to those ramifications.

Another government source told the JoongAng Ilbo that the meeting was supposed to send a strong message to the world that the alliance between South Korea and United States remained intact, even though Washington was leading a pressure campaign against Pyongyang while Seoul was conducting dialogue.

The second government source ruled out the possibility that the allies might discuss scaling down joint military drills, scheduled for April, or postpone them once more, suggesting that those options are implausible in light of the fact that the countries agreed late last year to a rotational deployment of U.S. strategic assets in South Korea. A large number of such weapons are usually mobilized for the Key Resolve and Foal Eagle exercises.

Song and Mattis could, however, talk about changing the schedule for the joint exercises for the United States’ convenience, the source continued. If this were the case, any agreement hammered out in the upcoming meeting will likely be announced in a low-key way in order not to provoke Pyongyang, said the source.