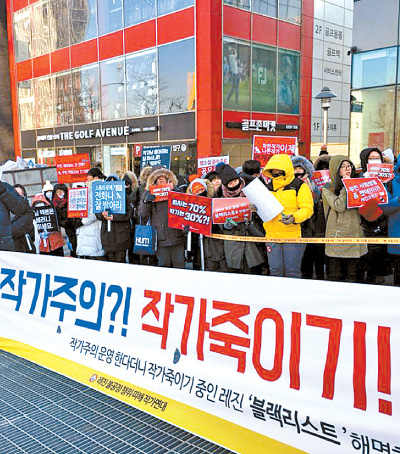 Around 100 webtoon artists and readers protest in front of the Lezhin Comics building on Jan. 11 in Nonhyeon-dong, Gangnam District, southern Seoul, demanding an improvement in labor conditions as well as an explanation and apology for rumors that the company has been using a blacklist of artists it deems troublesome. [HONG SANG-JI]

The South Korean webtoon industry is a fast-growing business currently valued at 724 billion won ($675.4 million), according to the KT Economics & Management Research Lab, but the working conditions of online comic artists, the industry’s driving force, leave something to be desired.

“When I told a webtoon platform the pay was too little, I was told to appreciate the fact that my works were being serialized,” one webtoon artist said. “When I approached another platform and told them I wanted to make a series about same-sex love, the manager looked me up and down and asked if I was a lesbian.”

Since late last year, webtoon artists have been uniting in opposition to such practices, with some posting and compiling their experiences online, which range from sudden termination to insults.

“After signing a contract, I had to change the initial plot and character design for my webtoon as the platform requested,” another artist said. “Soon after my serial started being published, I was told it would be discontinued.”

Many artists have focused in particular on Lezhin Comics, one of the most popular platforms in the country.

“After they begin serialization,” said Eun Song, the artist behind the popular Lezhzin serial “Reversi,” “most artists rarely have time for outings and they damage their health by trying to meet weekly deadlines and satisfy platform requests.”

One artist, who uses the pen name Grey and is known for the Lezhin serial “Records of the Cold Moon,” took to Twitter to express his grievances. “There are so many new artists,” he wrote, “who draw for months without ever being paid or getting their work serialized.”

When Grey revealed that he did not receive payment for serializing abroad, more Lezhin artists decided to break their silence. Some even reported instances where “late fees” were deducted from their pay whenever they failed to meet deadlines.

These events culminated on Jan. 11, when around 100 artists and readers protested these practices in front of Lezhin’s building in Nonhyeon-dong, Gangnam District, southern Seoul. At the protest, Eun Song accused the company of using a blacklist of artists it considers to be troublesome and limiting the promotion and exposure of their works.

Starting on Jan. 16, artists took turns staging individual protests against the blacklist. When the Korea Cartoonist Association and Korea Webtoonist Association demanded a public apology from Lezhin, the company admitted they had failed to communicate well with employees but denied the existence of a blacklist.

“After meeting with artists,” it said, “we decided to abolish the late fees and increase our minimum guarantee.”

Since September, the Ministry of Culture, Sports and Tourism has been working with the Seoul Metropolitan Government and three major webtoon platforms to come up with ways to create a more equitable environment in the industry, such as by strengthening copyright protection.

“As the webtoon market expands, there are more methods of profit distribution,” a ministry official said. “We are trying to create standard contract outlines that can be flexibly adjusted to the situation we face today.”

Next Tuesday, the ministry and Korea Manhwa Contents Agency will jointly hold a public lecture and debate at the National Museum of Modern and Contemporary Art in Seoul on how to create a fair webtoon working environment.