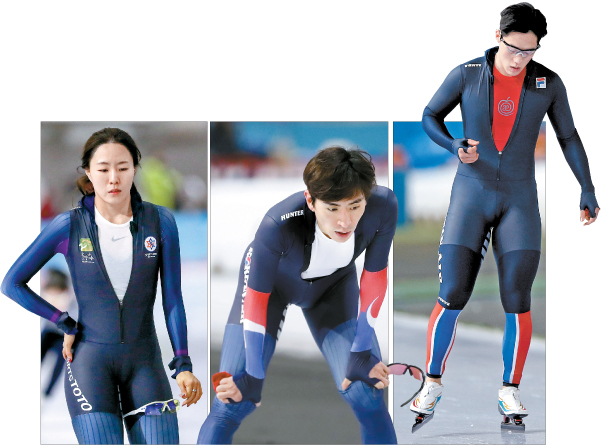 Upon completion of the 2018 PyeongChang Olympics, long-track speed skaters over the age of 26 will no longer be allowed to use the national team facility, according to a new regulation by the Korea Skating Union (KSU).

As of Jan. 1, only skaters under 26 may be on the national team, although the KSU plans to raise the age limit to 27 in 2019 and get rid of it by 2020. In addition, over the next two seasons, the number of skaters on the national team will be reduced from 22 to 17.

As a result, Lee Sang-hwa, Lee Seung-hoon and Mo Tae-bum won’t be allowed to train with the national team. Since Lee is planning on retiring after PyeongChang, it won’t affect her as much, but Mo and Lee Seung-hoon hope to compete until the 2022 Beijing Olympics.

The KSU explained its reasoning by saying, “After the PyeongChang Olympics, we’ll be given less training expenses from the government. Since we have time until the Beijing Olympics, we made the decision to focus on developing the younger skaters.”

However, this regulation does not prevent older skaters from competing in international competitions because they can still qualify through the national team trial in October. Once they do, they’ll still be allowed to compete at the World Cup series and the World Championship for the 2018-19 season.

In addition to skaters, the associates are also shocked by the new rule. For players like Lee Sang-hwa, who can afford to train in other countries, it won’t change her training schedule, but for skaters who train in Korea, it’ll be difficult since there is no better facility than Taereung International Skating Rink. And because they’re not allowed to use the facility, they won’t get paid for national team training.

“There are so many disadvantages if skaters don’t get selected to the national team,” said one coach. “It won’t affect top-class skaters like Lee Sang-hwa or Lee Seung-hoon, but it’ll affect others significantly. Training overseas is overwhelmingly expensive for an individual. It’s like passing on the problem of the association to older skaters.”

In addition, another coach has complained, “this is discriminating against the younger skaters from the professional team’s perspective.”

Some coaches say they weren’t even informed about the new regulation, while still another observed, “I’ve never heard about such age regulation in any other sports.”

This marks a reversal from 2016, when You Young, who won the Korea figure skating championship, wasn’t selected to the national team because she was too young. Winning at age 12, You became the youngest winner, but was too young for international competitions. You therefore had to find a skating rink outside Taereung, but later the KSU allowed her to use the facility.

Currently, the KSU is being criticized for its administrative oversight, especially with the Olympics fast approaching. The KSU recently found out that Noh Seon-yeong cannot compete in the women’s team pursuit race because of its misunderstanding of International Skating Union (ISU) Olympic qualification rules. According to the ISU, skaters competing in the team pursuit race must qualify in at least one individual race.

Noh was given no choice but to give up her dream of competing at the Olympics at the last minute and the women’s team is now in urgent need of a new team member. Noh is the older sister of former short-track speed skater Noh Jin-kyu, who died of bone cancer in 2016. When Noh Seon-yeong was selected to the national team, she said, “I’ll achieve a good result at my last Olympic stage for Jin-kyu.”

The KSU also hasn’t yet made an announcement regarding the punishment of the short-track speed skating coach who assaulted Shim Suk-hee earlier this month.

Though the skater is back to regular training and the coach was suspended, no further punishment has been announced.