Kang Hong-suk discovers he has an evil side : In ‘Hourglass,’ the musical actor plays a villain for the first time in his career

Kang Hong-suk discovers he has an evil side : In ‘Hourglass,’ the musical actor plays a villain for the first time in his career 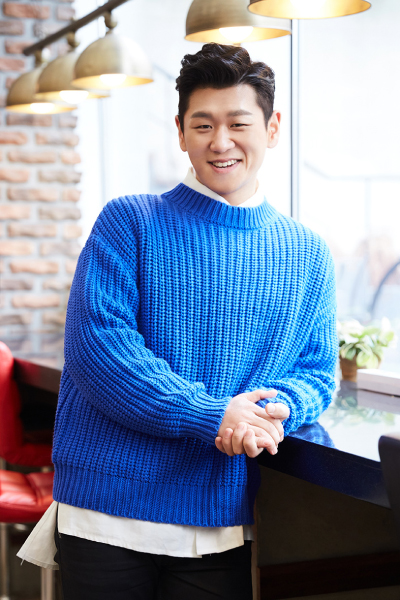 In the spring of 1976, Hye-rin is a student activist fiercely fighting against former president Park Chung Hee’s dictatorship, while U-suk, who struggles between wanting to protest and preparing to achieve his dreams, is secretly in love with her. Tae-su, one of U-suk’s childhood friends and the leader of one of the biggest gangs in the country, also falls for Hye-rin.

The three friend’s fates become intertwined when they get tangled up in the power struggles of the top brass during turbulent times. In “Hourglass,” the mostly dark atmosphere of the stage and the tragic ending are sobering, but there are characters like Jong-do who lighten up the mood. Since he’s the bad guy, actor Kang Hong-suk, who plays Jong-do, hopes that the audience will feel some satisfaction from his character’s death. Korea JoongAng Daily met Kang at a roundtable interview with the media to talk about his character and how the actor is doing in his latest role. 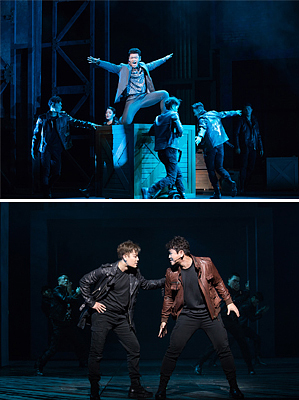 Q. This was your first time playing a villain. How was it?

A. At first, I was doubtful that I could pull this off, but due to the audience’s enthusiastic reactions, I am now at ease and more confident that I can play bad guys as well. I wasn’t sure if there was a villain in me, but many seem to enjoy my character, so I am really relieved. I’m also sure that Jong-do will lead me to play more villains in the future.

I remember the tingling I felt in my toes when I saw actor Hwang Jung-min play the villain in “A Bittersweet Life” and I wanted the audience to feel that same tingling about me. When I raise my dagger to stab Tae-su’s back, I hear gasps from the seats, and that kind of response gives me energy to continue performing on stage.

Do you sympathize with your character, Jong-do?

Not at all. I simply hate those kinds of people. I don’t understand why he betrayed and tried to kill his friend instead of becoming competent and recognized for his talents. His method was too extreme. So when he dies, I want the audience to laugh and be satisfied that at least one good thing happened when everything else is falling apart on stage. I don’t want them to sympathize with his death, or put any meaning behind it. Jong-do had it coming, and he deserves to die.

If you don’t understand your character, then isn’t it hard to play him?

It was actually easy, when I think about him in a straightforward way. He’s the type of person who sells off his friends for his survival. I simply happen to hate that type of person, and partly because I see quite a few of them in my life. I did get inspiration from them for Jong-do though.

I also fantasized about playing the gangster, because I remember how other actors played the villains so well when I was growing up, so I wanted to depict that kind of evil one day. But I wanted the audience to see how Jong-do transforms into the bad guy. He’s not bad from the start. I didn’t want him to be bad from the start. At first, he’s an average kid whom everyone might see in school. Then he is influenced by the power politics and slowly becomes the villain of the story. I don’t know if the audience felt this, and this is something I am continuing to develop in my performance.

Is it true that you were cast on the spot?

Yes. I went to the audition fully dressed in black, and once I came in, the director said, “Oh, you are a gangster. You are in!” I was bewildered because I didn’t even show my monologue, but it felt good. After I was cast, I watched all the episodes of the original drama series [that the show is based on], and the story was so intriguing and fun. The overall quality of the storyline was absolutely amazing and I couldn’t believe that it was made more than 20 years ago. I’ve been on drama sets before, and I know how chaotic and hectic it is just to edit the scenes, so I was simply in awe, and became more determined to play this character and live up to the expectations of the original.

During the introduction of the musical, the audience learns about the childhoods of Tae-su, U-suk and Jong-do. How were your school years?

Well, in my school years I crossed a lot of lines. I was mostly really angry when I was in school and did my best to get off of school grounds. For instance, I would always eat lunch outside of school. It was just really painful for me to listen to the same classes and stick to the schedule that the school provided for me. One thing I remember vividly was a time in art class. I was supposed to be drawing, but my eyes wandered off to iron bars on the windows in the first floor. I guess they were put there to prevent students from running away and skipping class. But when I saw them, I felt like I was studying behind prison bars. In that moment, I realized that “This isn’t me. I need to find another way.” I liked talking in front of people and wasn’t afraid of getting attention, and I found myself pursuing my dreams to become an actor.

Do you have any difficulties or hardships regarding your profession?

I love my job. I love how I can freely perform on stage. But one thing that will always be hard is keeping my body in shape. I just love to eat, drink, and eat some more, but I always have to be on guard because of my diet. I have to do it as part of my job. In fact, I lost some weight before I started this musical.

Another difficulty would be, and I presume majority of actors feel this way, making ends meet in this job. I do sometimes agonize over whether this is really the best way to earn my living, because of how unstable and insecure this profession is. I feel a bit uneasy if I don’t have a role to perform, but I just decided to let it go and enjoy not knowing what the future holds. It does help that I’m not the type of person that worries a lot. I always try to be simple-minded and enjoy the moment. I am also a lot more passionate than others my age [31], and when I sometimes get a little too enthusiastic, my wife calms me down. Marriage also helped me find peace. In the past, when I had troubles, I would go to a bar and drink soju by myself. But now, I have someone to talk to and share my stories with. That helped a lot, and she has been very supportive about my job.

There’s a line in the musical, “If you turn back the hourglass, you can start all over again.” Were there any of those turning points for you in your life?

I first thought “Kinky Boots” was a turning point in my life, but now that I think about it, becoming a musical actor itself was my turning point. I still have a long way to go, but I’m so thankful that many production companies are thinking of me, that I have a chance to tell my story.