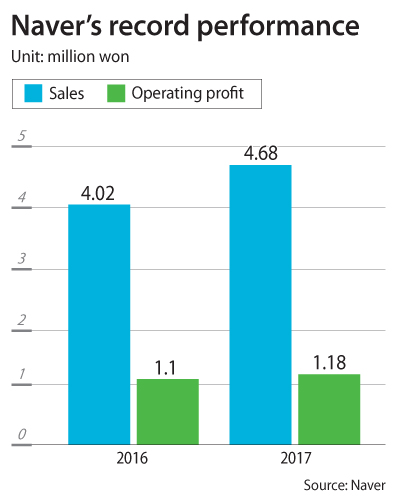 Naver, Korea’s portal giant, posted record performance in 2017, according to the earnings data the company posted on Thursday.

According to the regulatory filing, Naver posted 4.678 trillion won ($4.39 billion) in sales last year, up 16.3 percent compared to a year before. Its operating profit came to 1.178 trillion won and its net profit 770.1 billion won, the report showed.

Its sales from the fourth quarter in 2017 jumped by nearly seven percent year on year to 1.266 trillion won, an all-time high for quarterly earnings.

Nearly half of the company’s earnings came from its business platform, which includes a cost per click business model that “calculates the cost of advertising based on the number of clicks received.”

The company’s information technology platform business, which includes businesses such as its payment platform NPay as well as the company’s cloud service, also showed tremendous growth. From September to December last year, Naver reeled in 66.4 billion won from the business, up 70 percent compared to a year before.

The company has been in hot water recently, mired in allegations that the search engine operator may have misused its market dominance.

Earlier this week, it was reported that the Fair Trade Commission, Korea’s antitrust agency, visited the headquarters of the tech giant to investigate the allegation it exploited its market power to promote its own payment service over its competitors. Naver has about a 70 percent share in Korea’s search engine market.

It is also being accused of manipulating comments in its news service to influence public opinion.

But despite such rumors and ongoing probes, Naver’s share price advanced by 3.99 percent to close the session on Thursday at 913,000 won, thanks to its record breaking performance. It was the first time in five trading days that the search engine’s stock price has recovered back to above 900,000 won.

During a conference call Thursday, Naver explained it hopes to post double-figure growth again in 2018. The company said it will inject an additional 60 billion won into its webtoon service Naver Webtoon, which makes the tech company’s total financial commitment to the service 110.56 billion won.