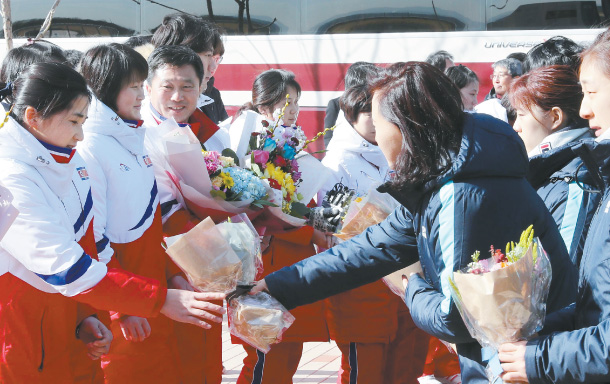 South Korea’s women’s ice hockey team, right, greet North Korean players Thursday at a national training center in Jincheon County, North Chungcheong. The joint Olympic team will have their first test on Feb. 4 when they face off against Sweden in a friendly match in Incheon. [YONHAP]

Twelve women’s ice hockey athletes from North Korea crossed the border Thursday to start training with South Korean teammates on a joint Olympic team. Their teamwork will get a pre-Olympics test in a friendly match against Sweden in Incheon on Feb. 4.

The athletes, a coach and two supporting staff took a road linking the two Koreas near the west coast along with a second North Korean inspection team that will examine local accommodations, stadiums and Olympic press centers for the North Korean athletes, taekwondo performers, cheerleaders and reporters who will come to the South next month.

The group of eight inspectors was led by Yun Yong-bok, a deputy director of the North’s Physical Culture and Sports Ministry, and will stay until Saturday.

The North Korean ice hockey players drove straight down to Jincheon County, North Chungcheong, upon arriving at the Customs, Immigration and Quarantine (CIQ) office in Paju, Gyeonggi, some two and a half hours away by car from where the South Korean athletes have been training in the Jincheon National Training Center.

The South Korean players greeted them with bouquets and handshakes. North Korea’s coach, Pak Chol-ho, told local press, “We’re very happy to participate [in the Olympics] as a joint team, with the North and South becoming one.”

After the friendly match against Sweden, the Koreas will compete against Switzerland on Feb. 10 in the first Olympics Group B match, Sweden on Feb. 12 and Japan on Feb. 14.

The two countries have fielded joint teams only twice in international sport competitions before - for the World Table Tennis Championship in February 1991 and the FIFA World Youth Championship in July 1991 - but never have never done so for an Olympics.

South and North Korea agreed last Saturday in a meeting presided over by Thomas Bach, president of the International Olympic Committee, that 12 North Korean players would be added to the South’s existing Olympic squad of 23 players, but only 22 players will be entitled to play in each match.

The team will be led by South Korea’s head coach, Canadian national Sarah Murray, who will select at least three players from the North for each game. The team will compete as “Korea” and use the acronym “COR,” with its anthem being the Korean folk song “Arirang.”

When asked by local reporters last week to name a North Korean player who had left an impression on her in April 2016, when the two countries competed against each other in the International Ice Hockey Federation Women’s World Championship, Murray mentioned Won Chol-sun. But Won wasn’t among the North Korean players who came to the South Thursday.

Meanwhile, the 12-member South Korean delegation that entered the North Tuesday to examine facilities on Mount Kumgang to discuss a joint cultural event, and the Masikryong Ski Resort, where South Korean skiers will train with North Koreans, returned to Seoul Thursday evening.

Lee Joo-tae, director general of the Unification Ministry’s Inter-Korean Exchange and Cooperation Bureau, said they were “warmly welcomed” by North Korean officials and that a follow-up briefing on the visit was forthcoming.

A local government official told the JoongAng Ilbo Wednesday that the North told the South it would send a video featuring a rehearsal of the performances North Korea’s Samjiyon Orchestra will play next month when it holds two concerts in Gangneung, Gangwon and Seoul.

That move, said the source, is to allay local fears that the group might play propaganda, as North Korean orchestras have done in the past.