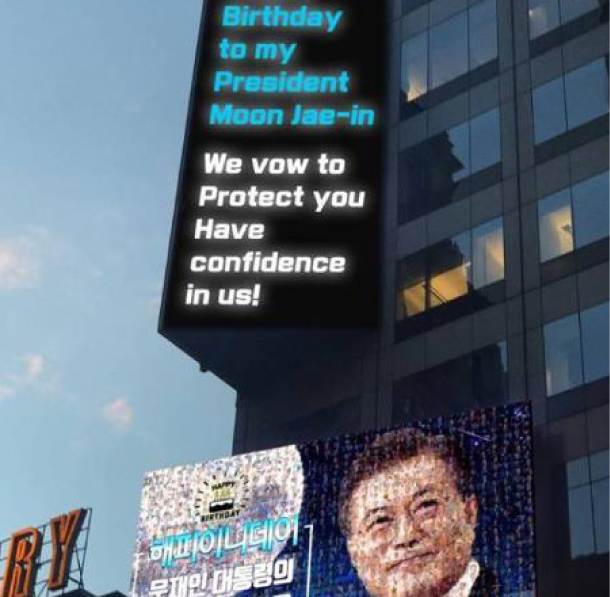 The PyeongChang Winter Games were 16 days away when “Peace Olympics” became the most-searched term last Wednesday morning on Naver and Daum, Korea’s largest portals and most popular search engines.

But then it lost the crown to “Pyongyang Olympics,” a sneering term suggesting that North Korea was running rings around South Korea in public relations ahead of the Olympic Games. “Peace Olympics” rebounded to become the most-searched term again a few minutes later. So did “Pyongyang Olympics” a little while later.

It was a battle in cyberspace between President Moon Jae-in’s supporters and critics, the former celebrating his 66th birthday Wednesday with a ringing endorsement of his efforts to make the PyeongChang Games a “peace Olympics” by inviting North Korea to participate and also holding cultural events in both countries.

Moon’s critics typed in “Pyongyang Olympics” to denounce the government’s concessions to North Korea during the weeks leading up to the Games.

One concession was the agreement for the two countries’ delegations to march into the opening ceremony on Feb. 9 behind a so-called Korean Peninsula flag, a white flag with a blue silhouette of the peninsula in the middle. Another sore point was that Seoul suggested, and eventually got approval, for South Korean skiers to travel to North Korea’s Masikryong Ski Resort, a pet project of leader Kim Jong-un, to train together and share know-how.

From Monday to Wednesday, two electronic signs hovered over Times Square in New York spelling out birthday messages for Moon, a “gift” that his supporters said they paid for out of their own pockets.

The billboards also featured cherished moments from Moon’s time in the Blue House.

In Seoul’s subway system, commuters will see birthday ads for Moon in 10 different stations on lines No. 5, 6, 7 and 8 until the end of this month, featuring a portrait of a smiling Moon with a message that reads, “Jan. 24, 1953 is when the moon rose in the Republic of Korea. Congratulations on your 66th birthday.”

“He sends President Park Geun-hye to prison through a ‘candlelight revolution,’ and even before her original tenure ends, makes a ruckus by celebrating his own birthday for 50 days with videos and music at 10 stations on four subway lines in Seoul. Does this make sense?” Kim wrote on Facebook.

“Does he not have any blood, tears, sense of shame or conscience?”