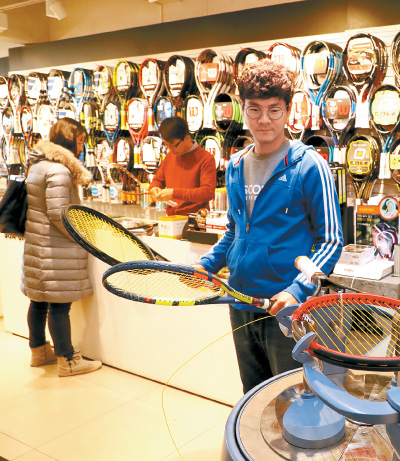 A customer shops for a tennis racket at Sunsports Mall, which specializes in tennis equipment, in Jung District, central Seoul, on Thursday. A tennis frenzy has swept the country ever since 21-year-old Chung Hyeon made it to the semifinals of the Australian Open. [YONHAP]

A tennis frenzy has been sweeping Korea ever since 21-year-old Chung Hyeon made it to the semifinals of the Australian Open, with many enrolling in lessons, buying tennis equipment and even expressing interest in what he wore during his matches.

Around Wednesday at noon, a huge crowd gathered by the large TV screen near Suseo Station in Gangnam District, southern Seoul, to watch Chung defeat Tennys Sandgren in the Australian Open quarterfinals.

This was the day Chung made history by becoming the first Korean to make it that far into the tournament. The game, broadcast on JTBC, recorded a viewer rating of 5.02 percent, higher than any other program airing at the time, according to the TV audience measurement company Nielsen Korea.

Chung surprised the country, and the world, when he beat world No. 4 Alexander Zverev, Jr. in the round of 32 on Jan. 20. “Chung Hyeon syndrome,” describing the national fervor, came into full swing by the time Chung defeated former No. 1 Novak Djokovic in the round of 16 on Jan. 22. Chung’s feats have brought tennis tremendous publicity in the country, motivating many to play the sport themselves.

“After Jan. 22, when Chung beat Djokovic, we received 1.5 times more calls from people in their 20s and 30s about lessons,” said Moon Sang-yoon, a coach at the Superman Tennis Academy in Gwangjin District, eastern Seoul. “We are unable to accept new students at this point for weekday early morning and evening classes because all are fully booked.”

The clothes and accessories Chung wore also received attention. Lacoste, one of Chung’s official sponsors since 2016, received a flood of customer inquiries about the pieces Chung donned for the match on Jan. 24.

“Because it’s winter, we didn’t have the short-sleeved T-shirt that Chung wore in stock,” explained a manager from Lotte Department Store, which carries Lacoste. “But taking into consideration the high level of interest, we are now processing the items in customs so they may be available in stores within a few days.”

Djokovic, also sponsored by Lacoste, has actually been the face of the brand for many advertising campaigns. Since Chung’s victories, however, domestic department stores, including Lotte, are planning to exchange the Serbian athlete’s posters for the Korean star’s.

Chung’s signature white-framed Oakley glasses, which earned him the nickname “The Professor,” are also getting a lot of attention. According to Luxottica Korea, which carries the brand, it received five times more than the usual number of inquiries after Chung’s advancement to the quarterfinals. The current model Chung wears, the 2017 FLAK Beta, ranges from 170,000 ($159) to 270,000 won.

The Swiss luxury watch brand Rado, which has also been sponsoring Chung through its YoungStar program, is also receiving more inquiries about its products than usual. Chung wore the Rado HyperChrome Captain Cook watch, priced at 2.86 million won domestically, during interviews following the round of 16 and the quarterfinals. Chung will play world No. 2 and reigning champion Roger Federer in the semifinals at 5:30 p.m. on Friday evening Korean time.