Chung bows out to Federer with his head held high

Chung bows out to Federer with his head held high 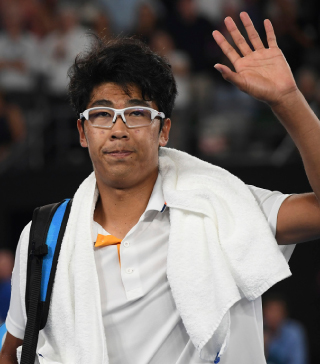 Chung Hyeon’s Australian Open journey came to an abrupt end on Friday evening after he was forced to retire in the second set of his game against Roger Federer of Switzerland at the Rod Laver Arena in Melbourne.

Chung was already 1-4 down in the second set when he took a medical timeout to receive on-court treatment for a blister on his foot. He returned to win the sixth game of the set, taking the score to 2-4. After losing the next game, Chung walked to the umpire’s chair to end the match, the pain obviously being too great for him to continue.

The first set of the 63-minute match had not gone much better. Federer made quick work of the first two games, winning both, although Chung was able to pull him back to deuce during both games.

Chung was more aggressive in the third game, losing the first point but returning to take three, finally smashing himself onto the scoreboard. Federer returned with a vengeance, winning the fifth, sixth and seventh games in quick succession to take the set 6-1.

Friday’s game may not have ended as Chung wanted, but he still leaves the court having won three games against Federer, the world No. 2 and reigning champion.

“Clearly I’m happy to be in the final, but not like this. He’s had such a wonderful tournament,” Federer was quoted as saying on ATP. “I think he’s going to achieve next level excellence - top 10 for sure. I can see why he beat Novak [Djokovic] and Sasha [Zverev]. He’s going to be a great, great player.”

Chung is the first Korean to ever reach the semifinal of a Grand Slam tournament, the youngest player to reach the Australian Open semifinals since Marin Cilic of Croatia in 2010 and the lowest-ranked player to get there since Marat Safin, No. 86, in 2004.

Having advanced to the semifinals, Chung has guaranteed himself 880,000 Australian dollars ($705,000) in prize money as well as 720 ranking points.

The points will likely allow Chung, currently world No. 58, to set a new Korean record in the world ranking, exceeding retired player Lee Hyung-taik’s highest ranking at No. 36.

Federer will face Marin Cilic in the final on Sunday night.