Unification and its contradictions

Unification and its contradictions 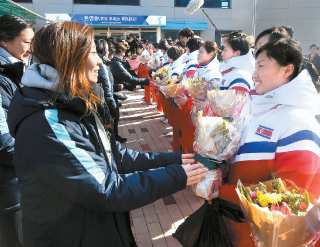 During a speech in front of the National Assembly on Oct. 14, 1986, Yoo Sung-hwan, a representative of the opposition New Korea Democratic Party, argued that unification, not anti-communism, should guide the national policy of South Korea.

The lawmaker became the first person to be arrested during the session for violating South Korea’s national security law. He lost his seat in the Assembly and served 270 days behind bars.

Yoo argued that if South Korea’s national policy was anti-communism, it could not invite countries from the Communist bloc to the 1988 Seoul Summer Olympics. He reasoned that national policy must be unification for the future interests of the nation.

Our thoughts on communism and unification have shifted greatly since the Cold War days. Except for North Korea, the entire Communist bloc, including China and the Soviet Union, participated in the 1988 Seoul Olympics. President Roh Tae-woo aggressively pursued rapprochement and normalized ties with Moscow and Beijing.

From then on, there have been two inter-Korean summits, and the two Koreas have marched side by side at the Olympic Games under a neutral flag bearing the picture of the peninsula and competed in international events as one team.

The joint team’s anthem is usually the folk song “Arirang,” but it should really be “Unification is Our Wish.” Our national policy should be unification if being united is best “for our people and nation,” as the song goes. The government seems to think fielding a joint women’s ice hockey team at the PyeongChang Winter Olympics will put Korea back on the path to unification.

Unless there are some people who believe anti-communism should be our national policy, the government should be applauded for its efforts to pull North Korea back into the global community. It would be particularly so if North Korea’s presence in the upcoming Games can water down the risk of war on the peninsula.

But the government erred by neglecting to ask the public for its opinion on forming a single Korean team. It may be because the government has conveniently bundled Korean unity, peace and unification with a joint sports team.

The debate over the country’s direction, between anti-communism and unification, is confined to generations that grew up under South Korea’s rapid industrialization and hard-won democratization. For Koreans in their 20s and 30s, born into a wealthier and more democratic society, the ideological dispute is beyond their understanding. They have turned away from their liberal president not because of the ideological issue but other problems in his administration. Setting a single national goal itself is meaningless.

If unification is set as South Korea’s dogma, it requires persuasion. The current generation cannot be forced to accept Korea as one. It needs to be convinced through a discussion of pros and cons.

Instead of empty rhetoric like unification being a “jackpot” and talk of North Korea’s rich natural resources and cheap labor as benefits of uniting, the government must be able to present a big picture of a single community and its effects on security and economy.

Unification and peaceful coexistence can be contradictory. The two Koreas must be able to overcome their enormous gap after living isolated from each other for over 70 years. Unification without narrowing the gap and distrust cannot ensure peaceful coexistence. As long as the constitutions of both states each define the entire Korean Peninsula as theirs and do not accept the other party, unifying can undermine or threaten peace or coexistence.

The situation is no different from Beijing and Taipei, in which each claims to be the true heir of China. We, too, talk of restoring our race as one identity. But we all know the potential risks and dangers. If peaceful coexistence cannot be ensured, I would rather stand on the anti-unification front.

For peaceful coexistence, we must accept the fact that North and South run under different regimes. The dizzying progress from Kim Jong-un’s New Year’s address proposing talks to forming a single team did not allow us time to ask whether we are really on the same team.
But for the time being, we can heartily cheer the Korean team at the upcoming Winter Games.