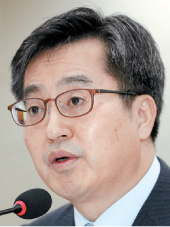 Conflicting statements from two government ministers on redevelopment policy is rankling the real estate market after Finance Minister Kim Dong-yeon struck a cautious note on Friday about restricting such projects.

The confusion began last week, when Kim Hyun-mee, minister of land, infrastructure and transport, indicated that the government might extend the amount of time that an apartment complex must wait before applying for redevelopment after its construction. The current wait period is 30 years, and she suggested it might be raised to 40.

Many homeowners anticipate redevelopment projects because they tend to significantly increase the value of their homes. If the government extends the wait period to 40 years, 67 residential complexes constructed in 1988 will have to wait another decade to apply. An estimated 7,300 households would be affected.

In Seoul’s real estate market, properties south of the Han River are some of the priciest and most prone to speculation. Prospects of redevelopment in Gangnam can especially drive up demand, and the government has made efforts to cool what it considers an overheated market.

Kim said the Finance Ministry would “deliberate on the issue, factoring in potential negative effects.”

The remarks contrast comments that Land Minister Kim made to reporters on Jan. 18 in which she said, “There is abnormally high demand for redevelopment in some parts of Seoul because of expectations of price rises and speculation.”

Not all apartment complexes that apply for redevelopment get approval. The government tends to apply a strict standard so that only buildings with safety issues can be redeveloped. Land Minister Kim said her ministry needed more time to review its safety inspection process and approve projects.

Meanwhile, Finance Minister Kim on Friday blamed real estate speculation for raising prices in Gangnam, but said the trend would not reverberate across other parts of the city.

Prices in Gangnam District jumped 0.93 percent in the fourth week of January compared to the previous week, according to the Korea Appraisal Board, while average growth in Seoul was 0.38 percent. 