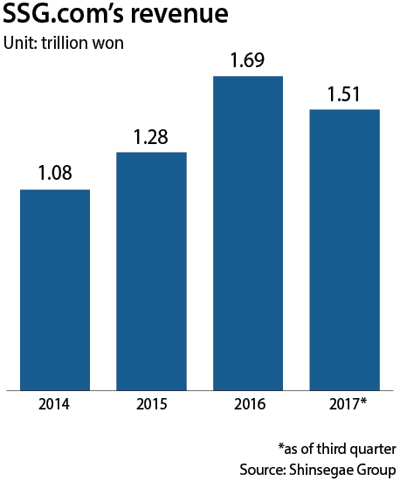 The retail giant announced Friday that it has signed a memorandum of understanding with two equity firms - BRV Capital Management and Affinity Equity Partners - which will invest in Shinsegae’s soon-to-be-established affiliate, which will take charge of the group’s online business.

With the new affiliate scheduled to launch this year, Shinsegae said it will raise its yearly revenue to 10 trillion won by 2023, five times what it is generating at the moment.

It announced Friday that it will spin off each affiliate’s online team and integrate them into one separate company.

The name of the new affiliate and when it will launch have not yet been confirmed.

“The company believes that such big investment was available because Shinsegae Group’s online business has shown rapid growth in recent years,” the company said in a statement.

Shinsegae Group started ramping up its online business in 2014 when it launched online platform SSG.com, which improved the online shopping experience for its customers by providing a simplified transaction process, faster delivery service and a wider range of products. It set up a logistics center named NE.O dedicated to online shopping in 2014.

The operating loss posted in 2014 was 64.2 billion won, but this shrunk to 10.7 billion won last year as of the third quarter.

“Online malls for Shinsegae Department Store and Emart were the main content for SSG.com,” said a Shinsegae spokesman. “But since each mall belonged to the department store and the discount chain, there was clearly a limit in creating synergy,” the spokesman added.

The new affiliate will enable a comprehensive investment plan and faster decision-making, according to the company.

Shinsegae Group has been keen on expanding its online business under the helm of Chung. Chung’s initiative was apparent when the retail giant was rumored to have considered acquiring Korea’s leading e-commerce platform 11st. At the opening event of Starfield Goyang last year, Chung said there will be a surprise announcement regarding the online business.

“The fact that investors agreed to invest more than 1 trillion won means that Shinsegae’s online business values at least 2 trillion won,” said Nam Ok-jin, an analyst at Samsung Securities. “The latest announcement is meaningful in a way that it became an opportunity to evaluate Shinsegae’s online business. It will become more meaningful when Shinsegae uses the invested fund to invest in itself and roll out aggressive M&As,” he added.