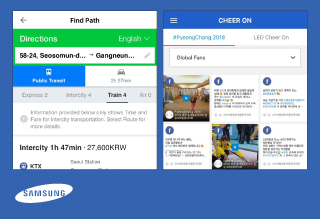 Samsung’s app offers transportation information, but users need to choose the means of transportation they will use before working out the route, as shown in the screen capture on the left. On the right is a screen capture of the Cheer On page, which shows posts with Olympics-related hashtags. Most of the posts are in Korean, potentially excluding international fans. [SCREEN CAPTURE]

With the long-anticipated PyeongChang Winter Olympic Games less than two weeks away, Samsung Electronics and KT, both official partners of the international event, have released apps to guide spectators to the venues in Gangwon.

The apps, developed in partnership with the official organizing committee for the games, were released Wednesday under the titles “PyeongChang 2018” for Samsung and “Go PyeongChang” for KT.

Both apps are generally good, but testing showed that there are a number of problems that have the potential to leave sports fans unable to reach their favorite events.

Samsung’s app is the place to go for all the basic information about the Olympic Games, such as game schedules by day and time, venue locations and even three-dimensional views of the stadiums.

Currently the app shows the event schedules, but as the Games begin on Feb. 9, the app will update with the results of each game, medal rankings of each country and the latest news regarding users’ favorite athletes.

PyeongChang 2018 also offers information about tourism and accommodation. Under the Explore Korea and Cultural Program tabs, users can find a variety of events, festivals and tourist sites near the stadiums.

The Cheer On tab collates posts from social networking platforms that have Olympics-related hashtags.

The app runs in five languages: Korean, English, Chinese, Japanese and French. The app can be downloaded on both Android and iOS devices for free. 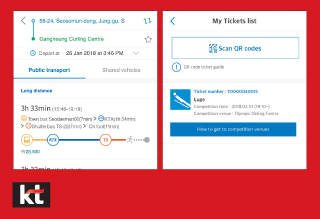 KT’s app shows various transportation options to destinations in PyeongChang including using shared vehicles, but prices shown are often inaccurate. The image on the right shows a screen capture after the QR code on a ticket is scanned. However, when the reporter pressed “How to get to competition venues,” the app said there is no matching information. [SCREEN CAPTURE]

KT’s app is a navigation app designed to guide users to the Olympic venues.

The first thing that users see when opening the app is a map of Pyeongchang with icons showing the different venues. If a user clicks on a venue the app immediately registers it as a destination. The app can also be used to find a route from anywhere in Korea to an Olympic stadium.

Go PyeongChang stands apart from other apps because it can guide a user right to the stadium doors, even offering journey details for the free shuttle buses provided by the Olympics. The app is able to find the quickest route to a venue combining different forms of transport and the costs of the different vehicles in order to give users a single projected price.

The app also includes various car-sharing options in a separate tab. When this reporter searched for a car to share near the Korea JoongAng Daily office in central Seoul, the app suggested a vehicle from Green Car an 11-minute walk away and said the journey would take 3 hours and 3 minutes.

According to a KT spokesperson, seven car-sharing companies in Korea, including SoCar and Green Car, are partnering with the app.

Go PyeongChang is offered in four languages: Korean, English, Japanese and Chinese. Surprisingly, the app is not offered in French, the official language of the Olympic Games. It can be downloaded on both Android and iOS devices for free.

Despite KT’s app specializing in navigation, Samsung’s PyeongChang 2018 also offers navigation advice, although it’s not as easy to access.

Once a user has navigated through the labyrinth of options to find the Transportation tab, they have to select which form of public transport they want to use before seeing route options. While the KT app checks different forms of transport to find the fastest route, the Samsung app uses the user’s preference as the main form of transport, regardless of how efficient it is.

But both apps struggle when it comes to searching for destinations. Unless a user knows the exact name of the venue they want to visit, they will not be able to find it by searching. Searches for “PyeongChang skiing” and “PyeongChang Sliding Center” gave no results on either map.

There are other glitches that need to be fixed before hordes of Olympics fans can rely on the apps to get around.

One of the most exciting features of the KT app is the option to scan the QR code on an Olympics ticket to automatically load venue details.

When this reporter tried scanning a ticket to men’s luge, the app had no problem identifying that it would be held at the Olympic Sliding Center and a button labeled “How to get to competition venues” appeared. After pressing the button, a warning notification popped up, saying, “There is no matching stadium information.”

On the second trial, the app froze.

There are other glitches in the KT app. While offering car-sharing options is an exciting feature for those who want to drive, the price shown on the apps is not exact at the moment, according to a source from the industry. For some options where users could use public transport and then transfer to a shared bus, called the e-bus, the fare appeared as 0 won, which is not true since public transportation used to reach the shared bus still costs money.

On the Samsung app there is a lot of content aggregated through the Cheer On section, but most of the posts are in Korean. Even the Olympic organizing committee has uploaded information in image files written in Korean, making it difficult for foreigners to participate in PyeongChang-related events on social media.