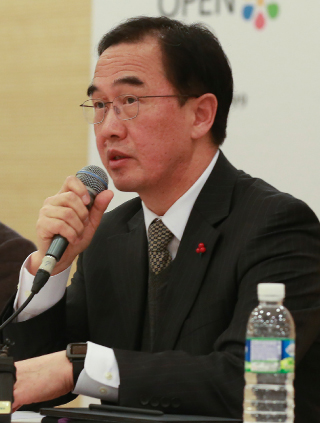 North Korea is gearing up for an “extremely large-scale” military parade that will likely fall on Feb. 8, its army founding day and the eve of the PyeongChang Winter Olympics, South Korea’s Unification Minister Cho Myoung-gyon said Friday.

Cho, speaking at a forum hosted by the Korea Peace Foundation in Jung District, central Seoul, confirmed local speculation that Pyongyang was preparing to show off its military even as both Koreas have been on convivial terms lately, saying there was a “high possibility” that the North would make it a “threatening” event by showcasing “nearly every troop and weapon” it has.

The parade, said Cho, is expected to be held at Mirim Airport on the outskirts of Pyongyang, as North Korean leader Kim Jong-un tries to solidify his leadership by using the 70th anniversary of the foundation of the Korean People’s Army and the regime.

Cho’s comments came nearly a week after a South Korean government official told local media on the condition of anonymity that signs have been growing since late last year that North Korea might hold a military parade soon.

Some 13,000 troops and 200 vehicles and artillery were seen lining up near the airport, the source said.

On Tuesday, the North announced it would change the foundation day of its army from April 25 to Feb. 8 and hold “diverse events” to mark the special occasion, without specifying what they were.

If it does mark Feb. 8 with a military parade, it would be the day before the opening ceremony of the PyeongChang Winter Olympic Games, set to kick off in South Korea’s northeastern province of Gangwon, a challenge to the Moon Jae-in administration’s effort to hold a “Peace Olympics.”

It would also coincide with a concert by North Korea’s Samjiyon Orchestra in Gangneung, one of three places in Gangwon where the Games will be held, which was agreed to by both countries last Tuesday night.

On the North Korea nuclear issue, Cho said it was “essential” that Washington and Pyongyang start talking to each other in order to overcome the current stalemate, adding Seoul would act as a conduit between the two countries to fulfill that goal.

The crucial part of Washington-Pyongyang dialogue is to narrow the gap between both countries, said Cho, but so far, “the United States and North Korea have just talked about their own side of the story” without considering the other party.

South Korea’s role in this standoff, Cho said, is to grasp what it is North Korea wants from the United States, convey that message to Washington, and vice versa. Seoul was actually “very busy” carrying out this task, though the minister quickly added he could not get into specifics.

Cho was pleasantly surprised about his Jan. 9 high-level meeting with the North, the first of such talks in over two years for the countries, saying he saw how committed Pyongyang was to ironing out their differences.

“I have the most experience participating in South-North meetings among [South Korean] government officials,” said Cho, “but one thing I realized last time was that, I think it was the first time the two countries managed to announce a joint press release after a single day of discussions, even though we hadn’t met in over two years.”

Cho credited this to Pyongyang’s change of attitude at the discussion table, saying the North relayed its statements once or twice, but then accepted a lot of South Korea’s proposals, unlike in the past, when both sides wrestled over even the most trivial matters.

“Before, the moment we raised the North Korea nuclear issue, they used to storm out,” said Cho. But this time, “they heard us out until the end and then subsequently explained their stance. As far as I know, I think it was the first time they did that.”