Ousted Park regrets being duped by Choi: her lawyer

Ousted Park regrets being duped by Choi: her lawyer 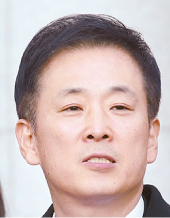 Former President Park Geun-hye, currently facing a criminal trial for conspiring with her friend to receive bribes from conglomerates, is extremely regretful that she was fooled by her longtime confidante, Park’s onetime defense lawyer said Wednesday.

Park was indicted in April 2017 for having abused her power to receive bribes from conglomerates by conspiring with her friend, Choi Soon-sil.

The former president is also charged with leaking confidential information to Choi. She has been boycotting the trial since October, describing the accusations as “political retaliation.”

All her lawyers, including a longtime associate, Yoo Yeong-ha, resigned from the case to protest a judge’s decision to extend her detention to April 2018.

In an interview with the JoongAng Ilbo, Yoo spoke for the first time about the case and his client. It was Yoo’s first media interview since Park was impeached and ousted from presidency in March of last year. The interview took place on Wednesday, and the JoongAng Ilbo published it in Friday’s edition.

Park was indicted in April for alleged crimes committed during her failed presidency. Prosecutors said Park, in collusion with Choi, received massive bribes from conglomerates through two cultural and sports foundations Choi practically controlled. Samsung’s contributions to the foundations and generous sponsorship of equestrian training for Choi’s daughter, Chung Yoo-ra, were described as bribes, and Samsung Electronics Vice Chairman Lee Jae-yong was also indicted for offering or promising the president a total of 43.3 billion won ($40.7 million).

Regarding the newly added charges that Park had misappropriated the funds of the National Intelligence Service (NIS) and used the money for private purposes, Yoo said the former leader is also innocent on this count. Earlier this month, the prosecution said Park had used 1.5 billion won of misappropriated NIS funds for private affairs, including beauty treatments.

Yoo had visited Park at the Seoul Detention Center after the new charges were added. Speculation was high that Yoo would be rehired, but Park ultimately did not retain him.

“At the beginning of her term, Park was briefed that the Blue House of the previous administrations had received money from the NIS and used it, and there is no legal problem involving the practice,” Yoo said. “She therefore told her officials to do business as usual. She never received any report about spending the NIS money.”

Yoo added, “It’s also not true that Park used the NIS money for private affairs. A president has their own special-activities account. There’s no reason for her to use the NIS money.”

Yoo also said it is unfair to hold Park accountable for the administration’s creation and operation of a blacklist of liberal artists to oppress them and cut their funding just because she was briefed about a plan.

“She doesn’t seem to recall any specific order,” Yoo said. “If you argue that she made a tacit order for something just because she received a briefing about it, it means that presidents will be linked to all sorts of crimes in the future. No administration will be safe, if you use that logic.”

Yoo said Park is feeling extremely remorseful for disappointing the people with the scandal involving Choi, but that holding her legally accountable is unfair.

“She already took political responsibility through impeachment,” Yoo said. “But legal responsibility is a different issue. A trial must be operated thoroughly based on jurisprudential facts, but the court is operating a political trial with a conclusion it has already created. It’s so cruel. She’s already politically assassinated. Why do they torture her so cruelly?”

Yoo also challenged the prosecution’s conclusion that Park and Choi are “economic symbionts,” blaming Choi for all the corruption. “Choi must come clean that she deceived Park, but she’s not doing it,” Yoo said.

Choi’s lawyer, Lee Kyung-jae, challenged Yoo’s arguments on Friday. “A sentencing is about to take place for Choi,” Lee told the JoongAng Ilbo. “The key is that Choi is Park’s co-conspirator. What will Park gain by denouncing Choi?”

The Seoul Central District Court is scheduled to issue a ruling on Choi’s case on Feb. 13.