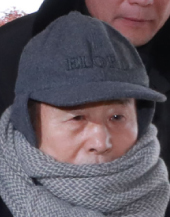 An elder brother of former President Lee Myung-bak was questioned by prosecutors on Friday over allegations that he accepted bribes from the state spy agency while Lee was in office.

He is suspected of taking hundreds of millions of won in 2011 from then-National Intelligence Service chief Won Sei-hoon, in return for helping Won keep his job when a failed NIS operation in Indonesia sparked opposition calls for his resignation.

Lee, 83, arrived in an ambulance from a hospital where he had been undergoing treatment since Wednesday, after briefly losing consciousness after he was called in for questioning on Tuesday by the prosecution.

Lee did not respond to questions from reporters as he was brought to the building in a wheelchair.

Lee was initially ordered to face interrogation on Thursday, but asked the prosecution to reschedule the date, citing health reasons. Prosecutors accepted and ordered him to appear Friday.

Prosecutors are widening the investigation into a string of corruption allegations against the former president and his family, including suspicions of a slush fund and power abuse involving his other brother’s auto parts company, whose real owner is said to be the former president.