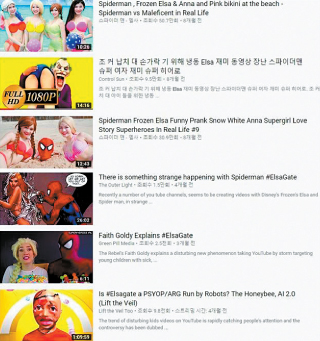 These days, people of all ages choose YouTube over television as their source of entertainment. But YouTube also has a surprising dark side, and shockingly dangerous and inappropriate videos can easily be uncovered by the youngest YouTube users, as shown by the case of ElsaGate.

ElsaGate, named after the main character from the popular Disney film “Frozen,” refers to parody videos that feature well-known animated characters engaging in unhealthy and abnormal behavior including cutting people’s body parts and inappropriate sexual activities. Elsa, the character from “Frozen,” is most frequently the victim of such abuse.

Beginning around 2014, ElsaGate videos that portrayed Elsa as pregnant, drinking from toilets and killing people began to appear. Perhaps more shocking than the content of the videos were the comments underneath, where users encouraged the uploader to release more content, and very few people noted the danger of the content. In addition, the accounts uploading these videos have an alarming number of subscribers, averaging 100,000.

Yet the tide of uploads has been hard to fight against. YouTube said it has deleted 150,000 of the hazardous videos, and yet 400 hours of such content are uploaded every minute.

The big challenge for parents in filtering what their children watch, and for YouTube in finding the videos, is that the same search terms that result in age-appropriate videos are the ones that contain dangerous content. If a child wants to watch a safe video about Elsa, it is hard to predict what they will end up encountering. Even the videos that result from a search for “nursery rhymes” or “color learning videos” may end up containing shocking visuals. A child may start out watching an appropriate video, but be lured into the dark world through YouTube’s related videos feature.

Busy parents wish they could leave their children alone, entertained by YouTube. But often, the outcome is that children are exposed to frightening, dangerous content that leaves them with bad influences and unsettling thoughts. Though YouTube apologized again for the ElsaGate situation last Nov. 22 and promised to erase the videos and accounts making the videos, the site is quickly becoming a deep, dark well that young children cannot escape from without help.