Gangwon tries for a green Games

Gangwon tries for a green Games 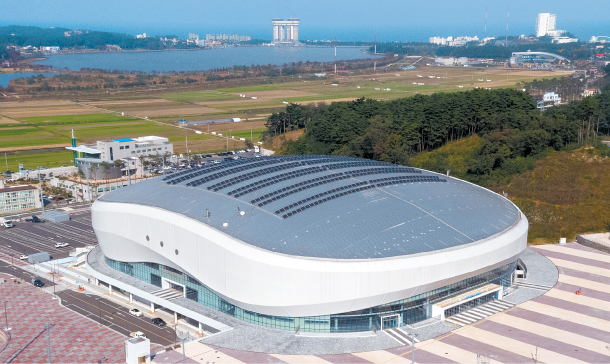 The Gangneung Ice Arena, which will host figure skating and short-track speed skating at the PyeongChang Winter Olympics. The arena was built on a reclaimed landfill. [YONHAP]

Previous Olympics have left behind tremendous environmental costs. As the PyeongChang Olympics approach, many are wondering whether it will be different.

The Games are taking several steps toward minimizing the use of fossil fuels. The Korea Environment Corporation decided to create a program to reduce and offset greenhouse gases. Korea will provide electric cars and hybrid vehicles for athletes, tournament officials and operating personnel.

Some were concerned that the arenas, hotels and more would be built near migratory bird habitats. There were also worries that local salmon may be harmed due to construction. But the Gangneung Ice Arena was built in an area that was formerly a landfill.

The 1998 Winter Olympics in Nagano, Japan, was held with the idea of “nature and symbiosis.” However, 5,000 trees were cut down to make space for the bobsled stadium.

“Hailing the vision of ‘an O2 Plus Winter Games,’” the PyeongChang Organizing Committee for the 2018 Olympic and Paralympic Winter Games is working on a sustainable environmental plan. Conserving water resources, revitalizing ecosystems, improving biodiversity and recycling waste materials into energy resources are a part of the Olympic Games’ environmental infrastructure. These environmental efforts have led to Pyeongchang’s designation as a “Low-Carbon Green Growth Model City” by the Korean government.