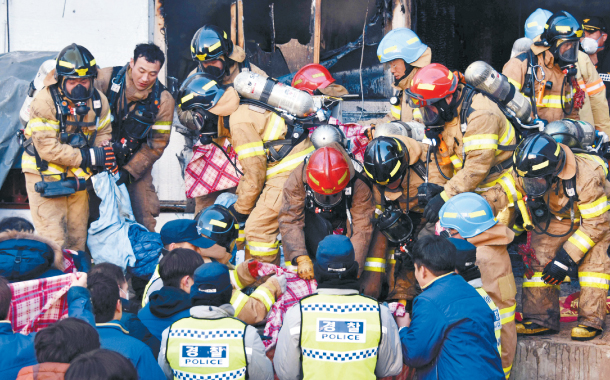 Firefighters and police officers recover dead bodies from the scene of a fire at Sejong Hospital in Miryang, South Gyeongsang, on Friday. The fire, which broke out 7:30 a.m. that day, killed 37 and injured some 130. [YONHAP]

A deadly fire broke out in a hospital in Miryang, South Gyeongsang, on Friday, killing 37 people as of 4 p.m. and leaving at least 130 injured.

The fire broke out on the first floor of the five-story Sejong Hospital around 7:30 a.m. Friday. According to witness accounts, it started from the nurses’ changing room beside the emergency room. Firefighters were soon dispatched and put out most of the blaze by 9:15 a.m. It was completely extinguished by 10:26 a.m.

The emergency bell rang shortly after breakfast. At least one nurse did not advise patients to take any action, believing the bell to be malfunctioning. Within minutes, however, smoke rose up the building. With the electricity down and stairways filled with smoke, patients climbed out the windows and down the ladders that firefighters held from below, or went to the roof to escape by helicopter. Some firefighters managed to break through the smoke to reach the upper floors. Passersby also helped rescue efforts, transferring the dead to nearby funeral homes.

“Most of the people who lost their lives were patients in critical condition who couldn’t move by themselves,” said Choi Man-woo, head of Miryang fire station, in a press briefing around 10 a.m.

“No one died directly from the fire,” he added. “We were able to wholly prevent the fire from moving up from the first floor to the second and third floors.”

Many of the 37 fatalities were patients in their 70s or older. Sick, elderly and unable to escape on their own, they were especially susceptible to the damaging effects of smoke inhalation. Among the dead were three staff members, including a doctor, who was on duty at the time.

Around 100 patients were staying in Sejong Hospital when the fire broke out. Patients were transferred to nearby hospitals for treatment or taken to funeral homes for shelter.

Sejong Hospital, in operation since 2008, services patients who require long-term care as well as regular patients.

President Moon Jae-in held an emergency meeting with top aides immediately after the fire broke out, ordering them to assist rescue efforts “to prevent additional casualties and keep the death toll from rising.” He also expressed his regret that the fire happened so soon after the blaze that killed 29 at a sports complex in Jecheon, North Chungcheong, on Dec. 21.

Kim Boo-kyum, the Minister of Interior and Safety, flew to the scene of the fire around 9 a.m. to help direct rescue efforts. “I am sorry about the huge loss of life in the Miryang fire,” he said. Prime Minister Lee Nak-yon, who also visited the hospital in the afternoon, emphasized the need for “material and emotional support to relatives of the victims.”

Police authorities announced that they created a special team headed by the Gyeongnam Provincial Police Agency to investigate the exact causes of the fire, saying, “We will focus on finding whether there was anything inside the changing room like an electric heater that could have set off the fire.”

They added, “We are having difficulties assessing the situation as the managerial personnel of the hospital, including the chairman of the medical foundation that runs the hospital and the hospital director, are either not answering calls or have their phones turned off.”

Many online commentators were critical of the fact that no sprinklers were installed in Sejong Hospital. According to the Ministry of Health and Welfare, only medical centers over 11 floors in height and 600 square meters (717 square yards) in area are required to have sprinklers. Sejong Hospital, at 394.78 square meters in area and five stories above ground, is exempt from the installation requirement.