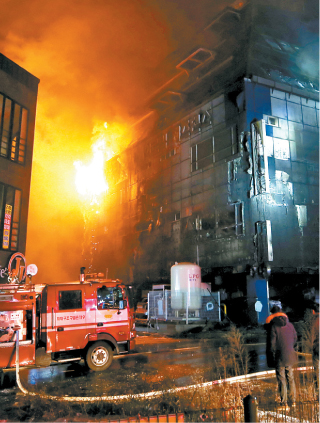 A fire breaks out at a multistory fitness center in Jecheon, North Chungcheong, on Dec. 22. [YONHAP]

While some people blamed the firefighters for failing to handle the situation properly — and it was true that rescue workers missed the so-called golden time to get victims out safely — they faced an obstacle on the scene that hampered their job: illegally parked cars.

When firefighters arrived, they found a number of illegally parked cars blocking both sides of the road leading to the building. As a result, fire trucks were unable to pass through and had to wait an additional 30 minutes to get close enough to the building while the cars’ drivers were called.

The reason for the caution is because firefighters in Korea are not allowed to damage illegally parked cars even when they’re dealing with emergencies. Rescue workers who damage vehicles often face lawsuits from the car owners.

In other countries like the United States, firefighters have more flexibility to carry out their work in emergency situations. There are instances of firefighters breaking car windows to access fire hydrants and scratching the paint while squeezing a vehicle.

It’s not hard to find illegal parking on Korean roads. Drivers do get tickets, but the fines are so low — around 30,000 won ($28) — that most just shrug it off. On Tuesday, a 700-meter (0.43 miles) stretch of road, about a half mile, in Yeongdeungpo District, western Seoul, was filled with illegally parked cars.

Experts say Korea should look to advanced countries for solutions to illegal parking and prevent a tragedy like the Jecheon fire from happening again.

Neighboring Japan has stricter and tougher traffic regulations than Korea, incentivizing many Japanese drivers to follow the law. In order to change Korean drivers’ mind-sets, experts say there should be more campaigns and ads related to traffic laws.

“We will amend lacking parts of the Framework Act on Fire Services,” an official at the Ministry of Public Administration and Security said. “For instance, when [firefighters] damage illegally parked cars in emergencies, they will not be held responsible.”