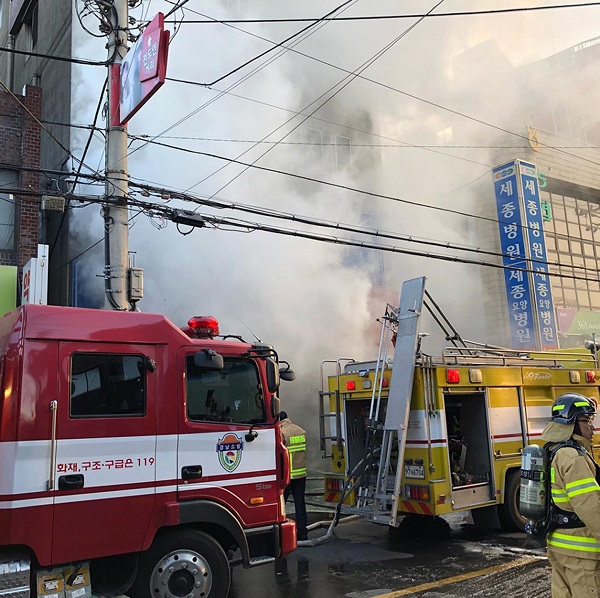 Dark smoke billows out of Sejong Hospital in Miryang, South Gyeongsang, Friday morning, as firefighters struggle to extinguish a fire that broke out around 7:30 a.m. [YONHAP]

A deadly fire broke out in a hospital in Miryang, South Gyeongsang, on Friday, killing 37 people as of 3 p.m. and leaving about 130 injured.

The fire broke out on the first floor of the Sejong Hospital around 7:30 a.m. on Friday, reportedly near the emergency room. Fire fighters were soon dispatched and extinguished most of the blaze by 9:15 a.m.

Authorities transferred the injured to four nearby hospitals. Some 100 patients were staying in the building when the fire broke out.

According to authorities, the majority of fatalities occurred on the first, second and fifth floors of the building. Authorities also evacuated the 94 patients staying in an adjacent hospital building. There have been no deaths reported from the adjacent building.

“It appears that the fire started in the changing room on the first floor,” one police officer said. “Because rescue efforts are still ongoing, there is a possibility that there will be more casualties later on.”

Sejong Hospital, in operation since 2008, is a nursing hospital that services elderly patients who need long-term care as well as regular patients. It has a total of 193 sickbeds, 98 of them for long-term patients.

Choi Man-woo, head of Miryang fire station, gave a press briefing around 10 a.m. “Most of the people who lost their lives were patients in critical condition that couldn’t move by themselves.”

The patients are thought to have died during the evacuation of the building.
“No one died directly from the fire,” he emphasized, adding, “We were able to perfectly prevent the fire from moving up from the first floor into the second and third floors.”

According to a patient who managed to escape from the second floor, the sprinklers failed to go off.