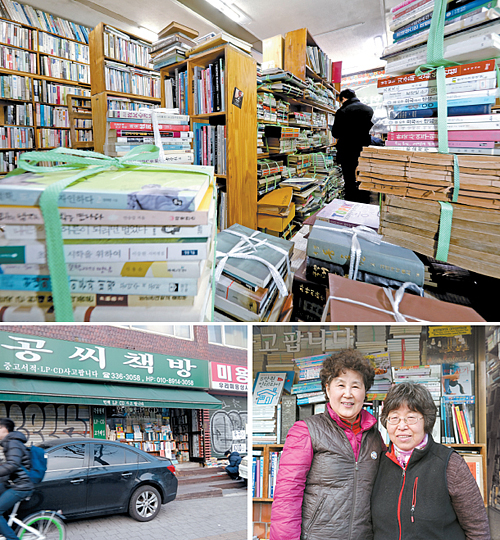 Mr. Gong’s Bookstore is filled with books stacked high, above, as the used-book store is getting ready for a move since it is being evicted from its current location. Left, the exterior of the Mr. Gong’s Bookstore in Seodaemun district, western Seoul. There are many books outside the store that are on sale. Right, the two owners of the bookstore, Jang Hwa-min, left, and Choi Seong-jang, are relatives. [JOONGANG ILBO]

A piece of paper near the entrance of Mr. Gong’s Bookstore reads “10,000 won [$9.40] for two books,” telling visitors of a deal that would be hard to find in many other places in the city. The secondhand bookstore currently located near Sinchon Station, in western Seoul, used to be a hot spot for popular writers when it was located in Gwanghwamun, central Seoul, in the late 1980s, but its heyday is long over.

With fewer people going to bookstores to buy books and the nation’s bigger bookstores positioning themselves as cultural hubs, the once-famous Mr. Gong’s Bookstore has slowly been forgotten, even among many of the most dedicated bookworms. After making headlines last year due to the possibility of shutting down, the bookstore, which collects and sells used books, is still struggling to stay afloat and is being evicted by its landlord.

Though named after Mr. Gong, there is no longer anyone with that surname who works at the bookstore.

Gong Jin-seok, the man who started the bookstore in 1972, died in 1990 and his two relatives who were working at the bookstore at the time of Gong’s death took over the business.

Gong, who didn’t finish high school, started working at a used-book store by Cheonggye Stream in his 20s. After earning some money, he opened a bookstore in front of Kyung Hee University, where he sold used books and textbooks for college students.

He then moved his bookstore near Cheonggye Stream in the late 1970s and then made another move to Gwanghwamun in the mid-’80s. The shop was about 100 meters (328 feet) from the flagship branch of the Kyobo Bookstore. Gong long dreamed of having a used bookstore as well-known and popular as Kyobo Bookstore.

But the struggle to find a place with affordable rent wasn’t easy. He wanted to stay near Gwanghwamun during the restoration of central Seoul, but the rent was getting too high for him.

While he was struggling to maintain the bookstore, he had a heart attack while on a bus in 1990 and passed away soon after.

After Gong died, current owners Choi Seong-jang and Jang Hwa-min, both of whom are relatives of Gong, took over the store. They moved to Sinchon after one of the shop’s regular customers Park Won-soon, who is now the mayor of the Seoul Metropolitan Government, suggested finding a new home in Sinchon since there are many universities in the area.

As the Sinchon area boomed commercially, the rent went up, of course, and the bookstore had to move to its current location, farther from the station.

Then last year, the building’s new landlord asked the owners to pay more rent. The monthly rent had been 1.3 million won, but the landlord raised it to 3 million won. Then, the landlord took away their offer and asked the bookstore to leave. The area near the bookstore includes hot spots for young people such as the neighborhoods of Donggyo-dong, Seogyo-dong, Yeonnam-dong and Yeonhui-dong, and building owners in the area have high hopes of making their property into a money-making gathering spot.

The owners tried to fight, but it was to no avail. The landlord won in a legal battle and they had to vacate the store, even after the owners argued that the landlord didn’t give them enough time to consider a move, as well as the fact that the bookstore had been designated as a future heritage spot by the city of Seoul in 2013.

However, the bookstore isn’t going away. It will move into a space in an underground floor of a building that’s about 50 meters away from its previous location. The number of visitors may fall, and the owners now have to worry a lot about protecting the books from humidity, and even under such conditions, the rent is 400,000 won higher than what they had previously paid.

“We could not breathe freely worrying about what to do with these books and whether we should get out of this business,” said Choi.

“We were lucky enough to find an empty spot nearby, and thanks to the people who offered a helping hand, we didn’t close.”

According to Choi, the number of customers has steadily decreased over the last 20 years. On a good day, they get a maximum of about 30 people visiting, and half of those visitors come to look for CDs or LPs, as the bookstore started to sell the secondhand music a few years ago.

“Sometimes I feel like I’m holding onto something that people don’t want to have, but books are precious,” said Choi. “I didn’t even go to high school, but after working [in a bookstore] for over 40 years, I can roughly guess what book has what kind of contents.”

During the two hours this reporter was in the bookstore, there were only two customers that came into the store. One was looking for a book of guitar tablature and one bought a book to prepare for an English test for 5,000 won.

To help the bookstore — with its future heritage designation — stay afloat, the Seoul Metropolitan Government has decided to cover some of the monthly rent for the next two years, although nothing more is promised after that.