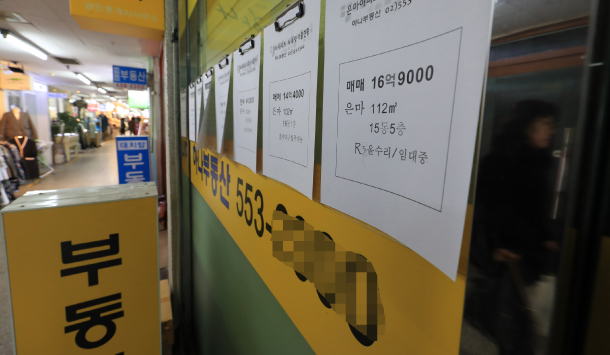 A real estate agency inside the Eunma Apartment complex in Gaepo-dong, Gangnam District, southern Seoul, with announcements about apartments for sale on Jan. 22. [YONHAP]

The government is reportedly reviewing regulatory measures targeting the real estate market in southern Seoul just five months after it announced what was touted as the strictest rules in over a decade.

The current administration sees the drastic rise in property values as being pushed by “speculative forces” and is mulling an extensive investigation on top of additional regulations specifically aimed at limiting demand.

In addition to mobilizing an investigative team comprising officials from related ministries, the National Tax Service has begun to probe buyers who purchased redeveloped or expensive apartments in the area of Seoul known as Gangnam. It is repeatedly sending a warning to owners of apartments that are slated to be redeveloped - apartments that will likely see a huge jump in value after they’re built. Such sentiment is one of the main reasons why prices are skyrocketing in Gangnam.

Kim Hyun-mee, the minister of land, infrastructure and transport, recently said the government would strengthen its inspections of apartments that applied for redevelopment and possibly make them wait longer for approval. Experts say such measures will make it difficult for any buildings to undergo redevelopment.

As a long-term measure, the government is also considering raising the real estate holding tax, which is levied on owners of multiple properties.

“Increasing the holding tax is justifiable from the perspective of fair taxation,” said Finance Minister Kim Dong-yeon earlier this month, signaling the possibility that a tax hike will come soon.

Park Kwang-on, a lawmaker from the ruling Democratic Party who serves on the National Assembly’s Strategy and Finance Committee, said the legislature was also considering a number of options before it launches a special committee at the end of this month to reform the tax code. He said the Assembly was mulling an increase of the holding tax.

Many experts point out it will be difficult to cool the Gangnam market by imposing repressive regulations because it worsens the imbalance between supply and demand. Experts argue that speculative demand stems from the fundamental problem of supply shortage.

The current situation is similar to a dramatic rise in property values under President Roh Moo-hyun’s administration, which introduced a number of regulatory measures specifically designed to control the market in Gangnam.

The Roh administration introduced a regulation to impose heavier taxes on those who owned more than one apartment, established a new real estate tax code and devised a measure to collect profit from redeveloped apartments.

The policies didn’t work. Apartment prices across Gangnam rose by about 80 percent while Roh was in office between 2003 and 2008, according to data from KB Kookmin Bank. During the same period, prices in Gangbuk, just across the river, rose by 32.5 percent.

“Even if the government raises taxes, the amount will only be in the millions of won, and those who own more than one apartment in Gangnam will not even flinch,” a local bank manager said. “Some of our clients say that if the prices of apartments do not go up, they will just hold it and give it to their children.”

Because of such sentiment, experts believe the government must prioritize its policies to relieve the supply shortage and prompt owners of multiple homes to put their apartments on the market.

“[The government] needs a ‘carrot’ that can get them to sell their units,” said Ham Young-jin of the real estate information provider Budongsan 114. “Authorities should consider easing regulations, including temporarily lifting the capital gains tax and giving special deductions for long-term home ownership.”

To inject new supply into the market, redevelopment is more effective than the government’s plan to develop public housing, analysts say, because the latter requires a tremendous amount of money including compensation to landowners. It also takes more than seven years to complete a project from scratch.

There’s also the problem of location. Most of these public housing developments are in the outskirts of Seoul.

“What we need are measures that expedite redevelopment projects and ease regulations to build more apartments where demands exists, such as near subway stations,” said Kim Shin-jo, CEO of iNex Housing, a real estate marketing firm.

“Because of government regulations, the quality of new supply shows fluctuations,” said a researcher from the Korea Housing Institute. “The government has to ensure trust that a stable supply of apartments will be available in cities where infrastructure is well established.”