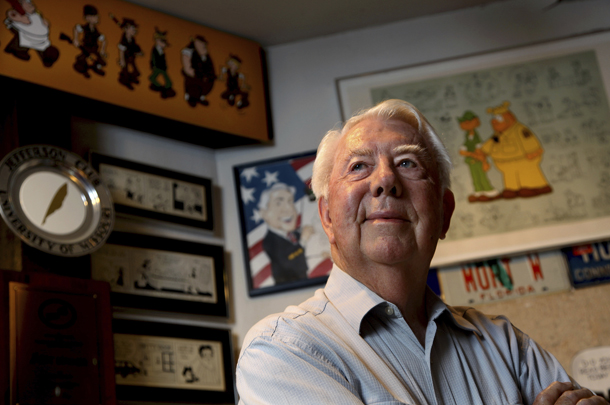 LOS ANGELES - Comic strip artist Mort Walker, a World War II veteran who satirized the Army and tickled millions of newspaper readers with the antics of the lazy private “Beetle Bailey,” died Saturday. He was 94.

Walker died at his home in Stamford, Connecticut, said Greg Walker, his eldest son and a collaborator. His father’s advanced age was the cause of death, he said.

Walker began publishing cartoons at age 11 and was involved with more than a half-dozen comic strips in his career, including “Hi and Lois,” “Boner’s Ark” and “Sam & Silo.” But he found his greatest success drawing slacker Beetle, his hot-tempered sergeant and the rest of the gang at fictional Camp Swampy for nearly 70 years.

The character that was to become Beetle Bailey made his debut as Spider in Walker’s cartoons published by the Saturday Evening Post in the late 1940s. Walker changed Spider’s name and launched “Beetle Bailey” as a college humor strip in 1950.