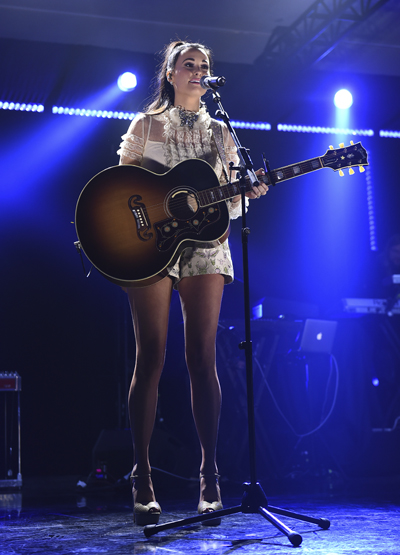 Musgraves sang two new songs from her upcoming third album, “Golden Hour,” strumming her guitar onstage with a six-member band and earning a standing ovation from the audience of record executives, music industry players and press.

Fonsi kicked off the two-hour event at Spring Studios in New York City with the ubiquitous hit, “Despacito,” nominated for song and record of the year at Sunday’s Grammy Awards.

He called the No. 1 track co-starring Daddy Yankee and Justin Bieber “an important song for us. I think it’s broken the language barrier in the world.”

Other song of the year nominees performed. Michaels, a respected songwriter behind hits for Bieber and Selena Gomez, sang her smash hit “Issues,” while rapper Logic closed the showcase with the suicide prevention anthem “1-800-273-8255,” joined by Alessia Cara.

Both Michaels and Cara are nominated for best new artist.

“This is dope. This is love. I’m happy to see everybody in this room still doing their thing. I’m happy to see the record business, the music business back in the state that it’s in [where] artists are getting paid,” Nas said.

The 60th annual Grammy Awards will air live on CBS from Madison Square Garden at 7:30 p.m. Eastern on Sunday.