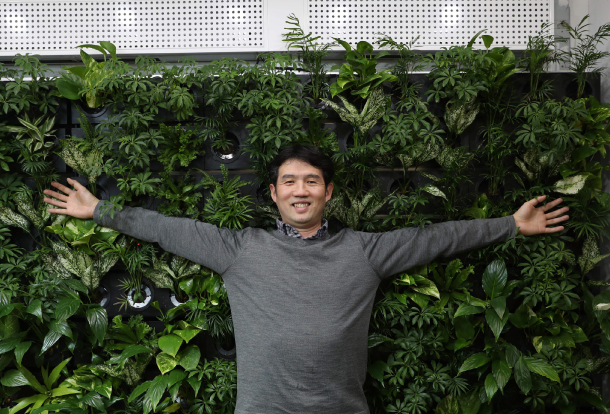 Haartz CEO Kim Seong-sik poses in front of the Vertical Air Garden - a wall made of plants that absorb harmful substances in the air and help maintain the adequate level of humidity in a room. [KIM SANG-SEON]

With fine dust taking over Korea’s skies, more people are trying to stay inside to avoid breathing in the bad air. But staying indoors doesn’t guarantee safety from hazardous particles floating in the air.

If your windows are always closed, various germs, dust, hazardous gas, organic compounds and CO2 will build up, creating a favorable environment for skin diseases like atopy, various allergies and respiratory diseases to develop.

A local company recently declared war against hazardous substances in your homes. Originally a manufacturer of kitchen ventilators, Haatz has been working to tackle indoor air quality for two years.

“We inhale air every day and today, it’s considered to be as important as water,” said Haatz CEO Kim Seong-sik. “With air pollution getting worse, there will come a time when people will start paying for fresh air as they do with water.”

Haatz was originally the country’s No. 1 manufacturer of range hoods with a 50 percent market share. A range hood is a ventilator installed above a kitchen stove, absorbing the smell and smoke produced from cooking. Almost every household has one.

“The experience of manufacturing and selling range hoods helped me realize that clean air is the ultimate value on the consumer’s side,” he said when asked why the company moved from range hoods to clean air.

As more and more people spend their days inside offices, indoor air quality has become an increasingly important factor in our daily lives. There are two common ways to keep the air clean indoors.

The first is opening the windows for ventilation. This method, however, isn’t very helpful when the air outside is far from clean. The second option is to install an air purifier. But this device is also limited as it can only clean and circulate the air that is already in the room. 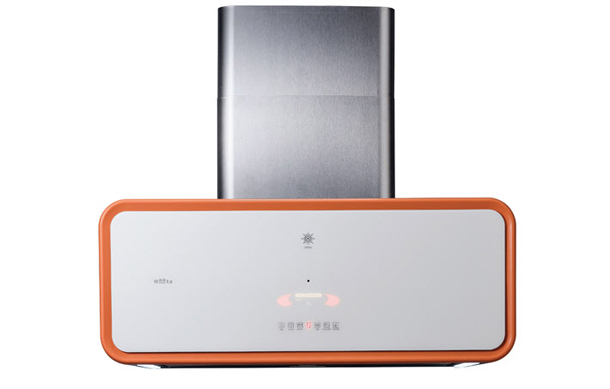 To solve this problem, Haatz opened an Air Quality Management Lab. One of the biggest things to come out of the lab is a ventilating air purifier for which a duct, or an air path, is installed to let out contaminated air and let in filtered air from outside.

Before the product’s official release late last year, Kim donated the system to state-run kindergartens in Ulaanbaatar, Mongolia. The city’s air is even worse than Seoul, filled with fine dust and yellow dust.

The weather is generally cold in the region, which means people spend more time indoors. Kim said the kindergartens that Haartz supported saw attendance increase as more students came in to profit from the clean air.

“It’s about time in Korea that teachers refrain from conducting class outdoors and changing them to indoor activities when the fine dust level is excessive,” said Kim. “To protect the health of our growing children, it’s important that the air they breathe remains clean.” But the air purifier market has already become a competitive one with a handful of major conglomerates doing business in the field. And compared to conventional air purifiers, the installation of Haatz’s product is more difficult.

“Our system cleans in a completely different way compared to old air purifiers, so we see demand rising in schools, hospitals and offices,” said Kim. “Installing ducts isn’t a complicated process, so even households that don’t have them can come to us too.”

Apart from the ventilating air purifier, other products from Haatz include the “vertical garden,” which is a wall covered with plants that are able to remove harmful substances in the air.

These plants also help in letting out fresh oxygen and maintaining the right amount of humidity inside the room. The installation is also aesthetically satisfying and a good interior piece.

The Smart Hood Pure is able to turn on automatically by reading the heat and light using optical sensors. In appearance, it looks like a range hood and actually functions as one during cooking.

But in a normal situation, it’s an air purifier, and when it detects harmful gas, it turns into a ventilator.

It is also capable of reading the user’s location and weather to control air quality inside the kitchen in time for the user coming back from work.

“It may seem ambitious, but my goal is to guarantee air quality of not only Koreans, but people all around the world,” said Kim. “For example, if we set up a vertical garden on the wall of every building and apartment, then I’m sure the effect will turn out to be bigger than any fine dust reduction plan.”