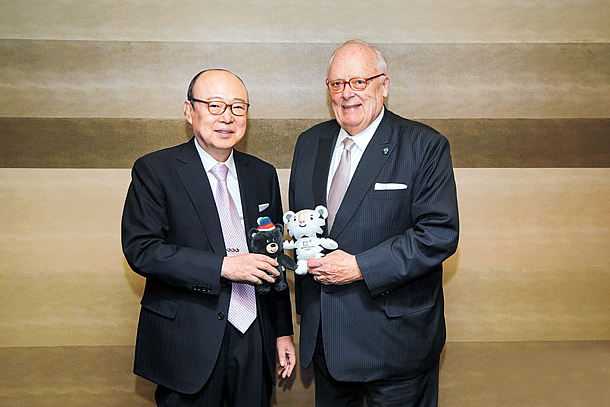 During a meeting that lasted two hours at the Plaza Hotel in downtown Seoul, Hanwha Chairman Kim said the Winter Olympics is more than a global sports event to the Korean people.

“It will become an opportunity for both South and North Korea to reconcile,” Kim said. “Hanwha Group will provide all support [for the Winter Olympics’ success].”

In response, Feulner said the success of the Winter Olympics will send a positive signal to the world while easing military tensions on the Peninsula.

The two also talked about the growing concerns over U.S. trade protectionism, including the recent tariffs imposed by U.S. President Donald J. Trump on solar panels and washing machines, and the talks to change parts of the bilateral free trade agreement between the two countries.

“Korean industry is faced with difficulties as the United States is strengthening its protectionism while the global free trade movement continues to spread,” said Kim.

Feulner is known as an influential conservative in Washington and also a strong supporter of Korean industry and is expected to play a significant role in the Trump administration’s policies.