Mourners try to make sense of fire at hospital

Mourners try to make sense of fire at hospital 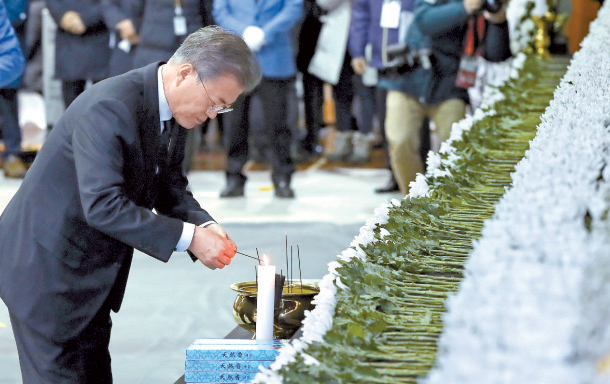 President Moon Jae-in pays respects to the victims of the fire at Sejong Hospital in the South Gyeongsang city of Miryang on Saturday at a group memorial altar set up at a gym in the city. A total of 38 people died and 151 were injured in the fire at the hospital on Friday. [YONHAP]

The blaze at Sejong Hospital in the South Gyeongsang city of Miryang continues to haunt relatives of the 38 dead, two days after it took the lives of their loved ones.

“She was 22 when we got married,” said the husband of victim Lee Hee-jeong, 35, who was the youngest person killed in the fire Friday. Lee had been hospitalized since December, when she injured her left leg in a car accident.

Her widower, a 47-year-old surnamed Moon, showed a reporter from the JoongAng Sunday a photo on his phone of him and his wife smiling widely together, cheeks touching.

“I remember the first day we met, it was love at first sight,” Moon said. “I kept asking and asking for months before she finally said yes and we got married.”

The couple has a 14-year-old son born with developmental disabilities. Moon said he could not immediately tell his son his mother’s fate.

“We told him about it on Saturday,” said Lee’s mother. “We didn’t know how best to break the news to him because we weren’t sure if he would be able to handle it.”

Lee worked at a restaurant for the past 10 years. Moon is a trucker who travels between Miryang and Seoul three times a week.

“The best part of the week was the weekend, when the whole family would go on outings together,” Moon said. “I cannot believe that such a weekend is no longer possible.

“If I could just see her one more time, I would tell her, ‘I want to be with you forever.’”

A total of 38 people died in the fire - 37 were found dead on Friday and one female patient who was rescued died of smoke inhalation on Saturday night - and 151 were injured.

Another victim was Kim Jeom-ja, a 48-year-old nurse in charge of patients on the second floor.

“She was a nursing assistant for 20 years and was promoted to nurse just three years ago,” said Kim’s brother Kim Byeong-su, 45. “I can still see her laughing out loud when she shared the news with me.”

Kim lived with her mother after her father passed away last year. She was talking to her mother on the phone around 7:35 a.m. Friday. Her last words: “I think there is something wrong.”

The fire broke out on the first floor of the five-story Sejong Hospital around 7:30 a.m. Friday. Firefighters put out most of the blaze by 9:15 a.m. It was completely extinguished by 10:26 a.m.

Some relatives mourned over the fact that a day’s difference in a discharge or admittance date may have saved their loved ones.

One of the victims was a 92-year-old woman surnamed Park, whose discharge date was Friday.

“We heard the news and just prayed, ‘Please let our mother live,’” said one of her daughters through tears.

Another victim, Moon Choo-ja, 70, was admitted to the hospital just a day before the fire.

“She was in a car accident that immobilized her 10 years ago,” said her son, Nam Seong-min. “She could not have gotten out of the hospital without aid.”

Most of the dead were in their 70s or older.

The police and fire department said in briefings that all 37 victims are suspected to have suffocated.

According to witness accounts, the fire started in the nurses’ changing room, which was next to the emergency room on the first floor of the hospital. Authorities inspected the first floor on Saturday.

“We will determine if the fire began on the ground somewhere or near the ceiling,” said Go Jae-mo, head of the legal security department of the National Forensic Service. “We think there may have been a short circuit.”

“There are two types of electrical cords in the ceiling of the changing room,” said a police officer during a press briefing on Saturday. “We think the two electrical systems may not have been installed properly.”

Police said they also found signs that the room may have been renovated illegally.

Experts have pointed out that the first floor of the hospital did not have a fire door and that there were no sprinklers installed in the building.

“Had the first floor had a fire door, it would have stopped the smoke from rising up to the second level,” said Gong Ha-seong, a professor of disaster management at Kyungil University in North Gyeongsang. “Usually smoke travels faster than the fire itself, by some one to two minutes.”

Because Sejong Hospital had no underground levels, it was not legally required to have a fire door on its first floor. The hospital had fire doors on the second, third and fourth floors of the building, which housed the wards.

“A firefighter said he saw some fire doors on some floors left open,” said Choi Man-woo, chief of the Miryang Fire Department.

The hospital is not legally required to have fire sprinklers. The enforcement ordinance to the Act on Fire Prevention and Installation, Maintenance, and Safety Control of Fire-fighting Systems passed in 2015 requires only buildings that are higher than six stories to have sprinklers.

The enforcement ordinance had also required nursing hospitals to install fire sprinklers by June of this year but Sejong Hospital does not fall under this category as it is registered as a general hospital.

“We may need an all-government type of response on installing firefighting facilities,” said Kim Young-cheol, a professor of disaster management at Kyonggi University in Suwon, Gyeonggi.

President Moon Jae-in visited the hospital on Saturday and met with relatives of the victims.

“I am terribly sad to see so many tragedies hit the country despite the government’s efforts to keep it safe,” he said.

Last month, a fire at a sports complex in Jecheon, North Chungcheong, killed 29.

In November, a 5.4-magnitude earthquake rocked the North Gyeongsang city of Pohang, damaging at least 3,300 structures, displacing nearly 1,800 people and injuring some 90.

A firefighter of the Miryang Fire Department said Sunday, “We broke through the smoke billowing out the entrance on the first floor after we arrived on scene at 7:35 a.m., just three minutes after the first fire report. Our skin felt like it was being roasted, but we fought the fire with all we had.”