Korean tennis sensation Chung Hyeon returned home to a hero’s welcome Sunday after his historic run at the Australian Open. 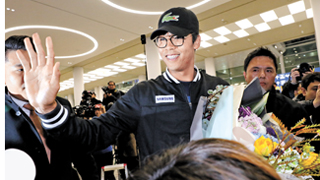 Chung Hyeon waves to the fans at Incheon International Airport after arriving from Australia on Sunday. [YONHAP]

Chung was greeted by hundreds of cheering fans at Incheon International Airport. The 21-year-old said he was surprised to see massive crowds.

“I didn’t know this many people would come,” he said with a smile. “It looks like I really did something great.”

Chung, now 29th in the Association of Tennis Professionals (ATP) rankings, defeated top-class tennis players to reach the semifinals of the Australian Open, becoming the first Korean ever to reach the last four in a Grand Slam event.

He withdrew from the semifinal against tennis legend Roger Federer due to blisters on his foot. His earlier opponents included six-time Australian Open winner Novak Djokovic and world No. 4 Alexander Zverev.

“Before the tournament, I had a thought that I could do something big and I didn’t know that day will come this fast,” he said. “I hope Korean tennis and many people can have confidence that they can also do it.”

In Chung’s semifinal match against Federer, who later claimed his 20th Grand Slam title with a victory over Marin Cilic, Chung was down 6-1, 5-2 before he decided to withdraw due to his injured foot. Chung said he learned a lot from the 36-year-old Swiss great.

“I would not have guaranteed my victory against a great player like Federer, even if I was in good physical condition,” he said. “Federer was really smooth and it looks like he doesn’t get tired easily.”

Chung became the lowest-ranked man to make the Australian Open semifinals since Marat Safin 2004. He said he enjoyed every moment at this year’s Australian Open.

“I can’t just pick one special moment,” he said. “My first Grand Slam semifinals, beating Djokovic after two years ... I was happy in every moment.”

In Korea, Chung will focus on receiving treatments on his injured foot. Chung will later decide whether he should compete at an ATP Tour event in Bulgaria next month.

“I think I have to go to the hospital tomorrow right away,” he said. “I’m going to set my future scheduled after my medical checkup.”

With his latest achievement, Chung is now ranked No. 29 in the ATP rankings, the highest ranked Korean tennis player ever. Retired men’s singles player Lee Hyung-taik achieved the highest-ranking by a Korean player, No. 36, which he did in August 2007.

Chung, however, said he is looking further.

“I want to set my sights on the top 10 in the world rankings,” he said. “I will aim high and move forward. I want to prove it.”

“Tennis isn’t really a popular sport here, but I want to make it popular,” he said. “I played with a lot of attention and support. I hope it continues.”

For the near future, Chung said he is looking to soon have a podium finish. Chung, who turned pro in 2014, has one victory on the ATP Tour.

“I don’t know when I will have this kind of good result, but I want to make it happen quickly,” he said.

Following his historic Australian Open, Chung’s agency signed full-time contract with his coach, Neville Godwin, who started working with the Korean a month ago. Chung said Godwin broke his stereotype of a foreign coach.