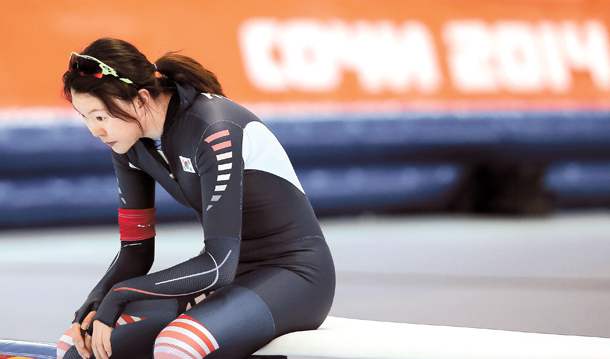 A photo of Noh Seon-yeon at the 2014 Sochi Winter Olympics. [YONHAP]

After a dramatic week, long-track speed skater Noh Seon-yeon has decided to participate in the 2018 PyeongChang Winter Olympics.

“Since last week was such a hard time for me, I gave it all up,” Noh said on a social media post on Sunday night. “Even trying my best at my last national team event, the PyeongChang Olympics, wasn’t easy. Through many thoughts I decided to compete at the Olympics and conclude my national team career, leaving no regrets.”

On Jan. 24, Noh posted a black and white photo of herself sitting in front of the Olympic flag on Instagram. On Sunday she posted the exact same photo in color.

“[She decided to] compete in both the 1,500 meter race and the women’s team pursuit race,” said Noh’s coach.

As she will be competing in the 1,500 meter race, Noh will also be put back into the women’s team pursuit race. The International Skating Union (ISU), the skating governing body in charge of Olympic quotas, requires all athletes in the team pursuit race to qualify for individual races.

However, after the KSU misunderstood the rules, Noh was ineligible to compete. Since Noh didn’t qualify for any of the individual races, as she was told that she only needed to pass the standardized time record, the KSU was given no choice but to cut Noh from the team on Jan. 22.

But Noh has been given another shot to compete at the Olympics, as two Russian speed skaters - Yekaterina Shikhova and Yuliya Skokova - were excluded from the final Olympic entry, which was approved by the International Olympic Committee (IOC) on Sunday.

Originally, the top 32 skaters in the women’s 1,500 meter race were given berths to the Olympics but the exclusion of the Russian skaters has allowed Noh, ranked No. 34 in the race, to earn a spot.

Once the KSU found out that Noh could compete, they added her name to the Olympic entry in the women’s 1,500 meter race and as a substitute in the mass start race.

Despite regaining her spot in the Olympics, Noh’s relationship with the KSU had deteriorated to the point that she wasn’t sure if she wanted to compete.

“I am no longer proud of being on the national team,” Noh posted on social media on Jan. 24. “And I don’t want to play for the country.”

Kim Sang-hang, president of the KSU, released a letter of apology and later that day, Noh responded saying, “I’m thankful to everyone that cheered me on. I’ll try my best at the Olympics.”

“This is the Olympics that I really wanted to compete in,” Noh was quoted as saying on Yonhap. “I thought I would regret it if I don’t take this chance with my emotions taking me over. I just want to focus on training right now. I don’t want to talk about conflict issues anymore.”

Noh is the older sister of former short-track speed skater Noh Jin-kyu, who died of cancer in 2016. Since her brother’s death, Noh had been eager to participate at the PyeongChang Games, competing for her brother.

“Four years ago, the Korea Skating Union turned their back on my brother’s pain because they were busy looking for an opportunity to win medals at the Olympics,” Noh said.

When Noh was selected to the national team, she said, “I’ll achieve a good result on my last Olympic stage for Jin-kyu.”

“If Noh didn’t return to the team, I was planning on adding either Park Seung-hi or Kim Hyun-young to the team,” said Baek Chul-gi, head coach of the Korean speed skating team. “But the team will be made up of Kim Bo-reum, Park Ji-woo and Noh Seon-yeong, just as planned.”

Kim also mentioned in his letter that the KSU has decided to get rid of the age limit for national team members. The union has also permanently suspended short-track speed skater Shim Suk-hee’s coach, who assaulted Shim earlier in the month.