GenieTalk hopes to give Olympic tourists a voice

GenieTalk hopes to give Olympic tourists a voice 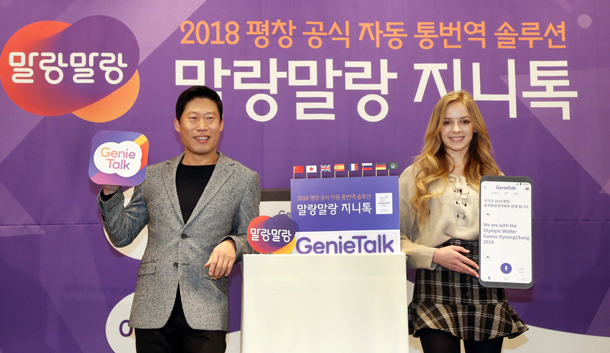 Actor Yoo Hae-jin, left, and a model introduce GenieTalk, a translation app from Hancom, a local software developer, at a press event on Monday in central Seoul. GenieTalk is the official translation app for the PyeongChang Winter Olympics. [HANCOM]

When you are lost in translation, ask Genie.

GenieTalk is a Korean translation and interpretation app that will be blurring the language barrier for athletes and visitors during the PyeongChang Winter Olympics, as an official Olympic language solution. Hancom, an office software developer, threw a press event on Monday to introduce its features and boasted of the app’s technological edge.

“Becoming an officially recognized PyeongChang Olympics’ translation and interpretation app means a lot,” said Kim Sang-chul, chairman of Hancom at the press conference. “Athletes and visitors to the event will be learning about Korean culture, tradition and sports through GenieTalk and we hope to use the event as a chance to promote how excellent Korea’s automatic translation and interpretation platform is.”

He said the company’s efforts to make GenieTalk an official app date back to 2016 during the Rio summer Olympics, when it succeeded in persuading International Olympic Committee members to opt for the Korean app over Google Translate.

Ever since signing up for translation and interpretation sponsorship for the winter games, Hancom has been building a database of Olympic and Gangwon tourism related terms and continued accepting user feedback to improve the app’s performance. Now, GenieTalk is powered by 100,000 Olympics-related words and phrases and can translate the names of athletes, sports, Korean tourist destinations and regional specialties such as Chodang sundubu, tofu that originates from Chodang Village in Gangwon.

“The conversation mode feature will reduce [unnecessary] interaction between users and will be particularly useful for the disabled and seniors,” Noh said.

Only six languages are currently available on iOS, and the Conversation feature is not currently included. An upgrade will become available before Feb. 9, the opening date for the Olympics, according to HanCom.

For those with no internet access, the Seongnam, Gyeonggi-based company best known for the Hangul word processor, has developed “GenieTalk Offline,” a device that plugs into a phone’s USB port. The device will be distributed across 1,400 accommodation facilities, 2,000 restaurants and 37 tourist information centers across Gangwon for free during the Olympics.