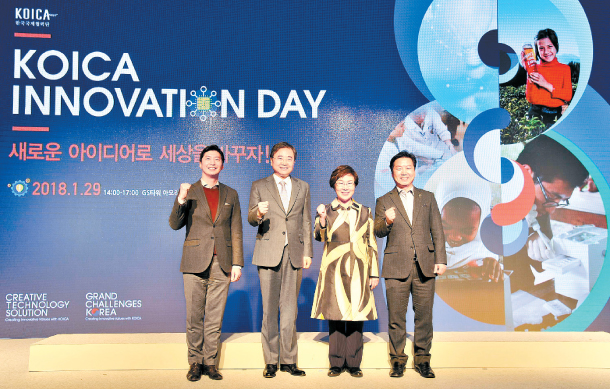 Park’s business started after a trip to India in 2014 on which he discovered that more than 1.3 billion people in the world live in unnecessary darkness - they’re not connected to the grid or electricity supply is so unstable there are constant blackouts.

To offer affordable lamps that got around grid problems, he had to find a prevalent and cheap fuel, which turned out to be cooking oil.

In many developing nations like Indonesia, people eat a lot of fried foods and cooking oil is widely available and inexpensive.

The lamp that runs on cooking oil is dubbed the Lumir K. It is about 80 percent more fuel efficient than lamps powered by lamp oil and is much cheaper to use. Only a half liter of cooking oil is need to keep the lamp burning for about 100 hours.

Another Korean start-up, Vuno, has come up with a quick and easy way to diagnose sexually transmitted diseases using artificial intelligence-based diagnosis software.

According to Vuno CEO Lee Yae-ha, about 400 million people are infected with sexually transmitted diseases such as trichomoniasis, chlamydia, gonorrhea and syphilis every year.

While these diseases can be cured with proper treatment, Lee realized that many people are not diagnosed due to primitive medical conditions. As many as 70 percent of people infected with trichomoniasis don’t show any symptoms in early stages of the disease.

Vuno’s software can detect a disease in only 0.3 seconds, which can take an hour or two by doctors using microscopes. The product was tested last year in Mongolia and Vuno is preparing to enter other markets.

“We used to buy innovative products and donate these products to developed nations but the help from our aid didn’t last long,” said Lee Mi-kyung, president of the foreign aid agency at the first “Innovation Day.” “Our new strategy hopes to overcome past limitations to make aid sustainable by nurturing start-ups with technologies that can improve the lives of people in developing nations in a market-friendly way.”

In 2015, the agency started a so-called Creative Technology Solution Program, which provides seed money, mentoring and networking opportunities to socially-minded entrepreneurs. Lumir and Vuno have been supported by the CTS program.

The CTS program has been cooperating with the Bill & Melinda Gates Foundation, which fights disease and poverty, the United States Agency for International Development as well as local start-up incubator D.Camp.