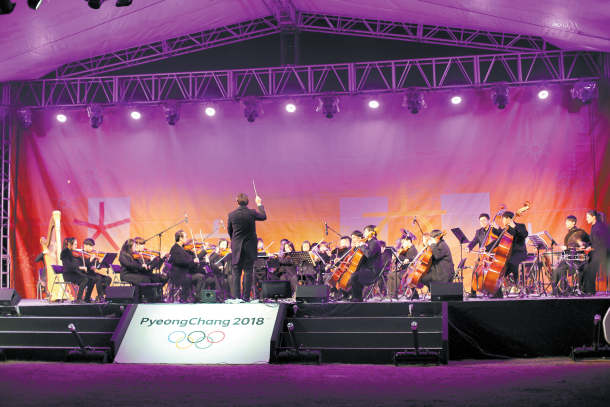 The Lindenbaum Orchestra performs “Arirang” during an event held at Yeouido Hangang Park in western Seoul on Jan. 16, to celebrate the arrival of the Olympic torch in the capital. [LINDENBAUM]

The Korean government recently confirmed that the North Korean Samjiyon Orchestra will hold a concert on the eve of the PyeongChang Winter Olympics at the Gangneung Arts Center on Feb. 8 and then once again at the National Theater of Korea in central Seoul on Feb. 11, before heading back up North the next day.

But the two concerts have been confirmed as solo events for the orchestra, letting down many South Koreans, especially musicians, who expected a scene of peace and harmony through a joint orchestra. The Korean Symphony Orchestra, under maestro Chong Chi-yong, was thought to be the most likely troupe to perform with Samjiyon as Chong and Lee Won-chul, the CEO of the orchestra, were both members of the four-person delegation from South Korea at discussions with the North near the border on Jan. 15. But they returned only to confirm that the North will perform alone.

“The word ‘peace’ is being emphasized in the upcoming PyeongChang Winter Olympics, especially the peace between the two Koreas,” said violinist Won Hyung-joon, executive director of Lindenbaum Music. “The best way to show that without causing controversy is through a joint orchestra performing both Koreas’ folk songs during the opening ceremony.”

Lindenbaum is a project orchestra that was established in 2009 in the hopes of bringing harmony between to the two Koreas through music. Ever since South Korea won the bid to hold the Winter Olympics in Pyeongchang, Gangwon, Won says he has been making efforts to bring musicians from the two Koreas together to perform at this international event. For the past 10 years, the orchestra has organized many concerts along the demilitarized zone (DMZ), the truce village of Panmunjom, and the Dongnimmun (Independence) Gate in central Seoul, to express their willingness to perform together with North Korean musicians. On Jan. 16, Lindenbaum played the folk song “Arirang” at an event in Yeouido Hangang Park, western Seoul, to celebrate the arrival of the Olympic torch in Seoul.

“It is disappointing to see that there will be no joint cultural event for the Olympics,” said Won during a press conference on Friday in central Seoul that he organized along with members of his project orchestra to express regret towards North and South Korean decision makers, who failed to create a joint cultural performance in honor of the PyeongChang Winter Olympics.

“I am quite frustrated that the South Korean government aggressively pushed ahead with forming a joint women’s hockey team despite criticism, but was reluctant in organizing a joint orchestra that would not require sacrifices from anyone,” Won added. “At this point, it seems unlikely that the Lindenbaum will be authorized to visit North Korea for the April Spring Friendship Art Festival (Asfaf) in Pyongyang, which the Lindenbaum has been invited to by the Paektu Cultural Exchange.”

Paektu Cultural Exchange is a Canadian organization that organizes athletic, culture, business and tourism exchanges with North Korea. According to Won, its director Michael Spavor has invited the Lindenbaum to perform at the upcoming event.

It’s not only South Korean musicians who are pressing the government to hold a joint music event. 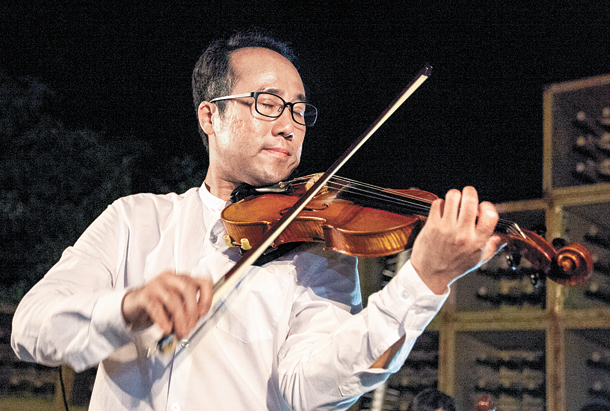 On Jan. 23, a 15-year-old Korean-American student named Elliot Shin from Portland, Oregon, posted a letter to President Moon Jae-in on the petition board of the Blue House website, urging the South Korean government to allow South Korean musicians to perform together with the North Korean orchestra for the upcoming Olympics.

“As a Korean-American, I do not know much about Korean politics, and to be honest, I am not very interested,” the letter read. “However, sharing peace through music is something I want to do for the rest of my life.”

Shin continued, “there is no better way than music to reach people’s hearts,” as he understands that President Moon “probably wants peace between North and South Korea.”

The two North Korean concerts are invitation-based and tickets will not be sold to the public.

“As I know, many musicians I know, including my brother, have been hoping to perform together with North Korean musicians,” said Chung. “But it seems like that is not the case for the upcoming Winter Olympics. However, we should not give up and hope that one day, the two Koreas can express peace and harmony through music.”