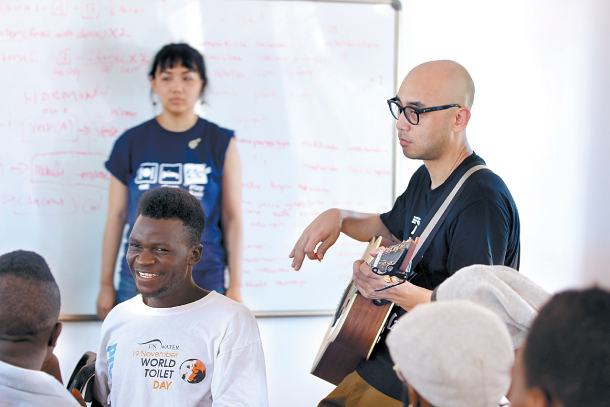 Harim, right, and students at a music center in Malawi compose music together for the PyeongChang Winter Olympics. [KOREA ARTS & CULTURE EDUCATION SERVICE]

On Jan. 13 at Mary Hall of Sogang University in western Seoul, a group of African students from Malawi showed off their musical talent, performing two songs - “Heung” and “Harmony” - written by the students for the upcoming PyeongChang Winter Olympics. Harim, a Korean singer-songwriter, was helping the students backstage before they put on a show they’ve been practicing for over the past two months.

For these Malawian students, the Winter Olympic Games is an unfamiliar event.

So why did they come all the way to freezing cold Seoul, wrapped in long padded jackets, to perform music they wrote for the Olympics?

Last November, the Ministry of Culture, Sports and Tourism and the Korea Arts & Culture Education Service organized the “2018 PyeongChang Culture Olympics Art Dream Camp” in four countries not familiar with winter sports - Malawi, Vietnam, Indonesia and Colombia. According to the Korea Arts & Culture Education Service, the program was created in an attempt to share with the world the rich arts and culture Koreans enjoy.

A group of Korean musicians, including Harim, traveled to Malawi for the second time in November and met with students to make music together.

“It was our second time visiting and we felt that they’ve been waiting for us,” he said. “Their musical abilities have improved so much that we were able to write two songs in just two weeks.”

While it may seem like the Korean musicians pushed the Malawian students to compose the songs, Harim said that “all we did was just help organize and help bring out the stories to tell through music.”

“African students are full of energy and that is fully expressed through the music,” Harim said as he explained the two pop songs they created. “It’s so natural for them to make pop music based on traditional rhythms and singing styles. We went there to teach the students and share something before the PyeongChang Winter Olympics, but we came back inspired.”

“No one actually stopped anyone from fusing traditional sounds and beats with contemporary pop music in Korea, but we don’t have that. K-pop songs sound the same and there’s no hint of traditional anywhere. It’s geared towards being commercially successful,” said Harim.

Since 2008, the singer has visited African countries including Namibia, Zimbabwe, Kenya and Malawi, as part of his “Guitar For Africa” project, which gives guitars to African students who show a passion for music.

“The reason why I continue to visit African countries is because there are no strings attached to their music,” said Harim. “I teach world music at a university and I tell my students that there is no correct answer to music composition. I urge them to stop thinking about what kind of music makes money, and be free from the market, like the Malawian students who came to perform in Korea.”