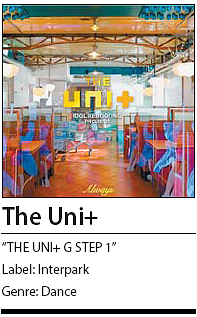 Television network KBS2’s singing competition program “The Unit,” whose contestants are made up of former pop group members who failed to achieve success, has released an EP featuring five tracks from the show’s five girl groups. Several top producers such as Doublekick, Maxx Song and Swedish producer Simon Janlov worked on the album.

The first track, “Always” by the group Blooming, features a fresh melody with lyrics about how a girl is hesitating to get closer to a guy she wants to be with.

Too Charming’s track “Sweet” is a love song about a girl who is deeply in love with a charming guy. Nine Girls’ “Poco a Poco” tells the story of a girl wanting to stay in love forever.

“Cosmos” by the Red Band Girls has a unique melody and a complex beat. The song makes use of the two meanings of cosmos and features lyrics such as “The shining stars of dark night shed light on us” and “When the cosmos blooms, please hold my hand.”