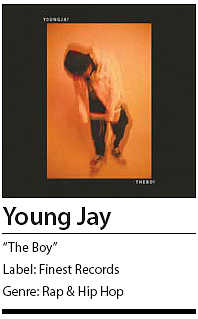 The 19-year-old Lee Joon-ki, who left his hometown Paju, Gyeonggi, and settled in Seoul, is now 26-year-old rapper “Young Jay.” After experiencing many things and meeting many people, he collected his memories and feelings in his 2013 debut EP “From Paju To Seoul.”

Three years later, the rapper has seen many changes take place around him, including friends getting married and the rise of Nucksal, a close friend of Young Jay’s, who has become a star after appearing on cable channel Mnet’s “Show Me the Money.” The album features Young Jay’s confused feelings about the many external changes that have happened around him.

His second EP consists of 10 tracks including the first single “I Know.” Unlike his first album, which only featured the rapper, his second album includes collaborations with various artists including Don Mills, Nucksal, YumDDa, ODEE, X.Q and Bassagong, expanding the musical range of his songs. The album was released on Jan. 19 and it kicks off what will surely be a busy year for the rapper.