Chinese will be allowed to attend Games without visa

Chinese will be allowed to attend Games without visa 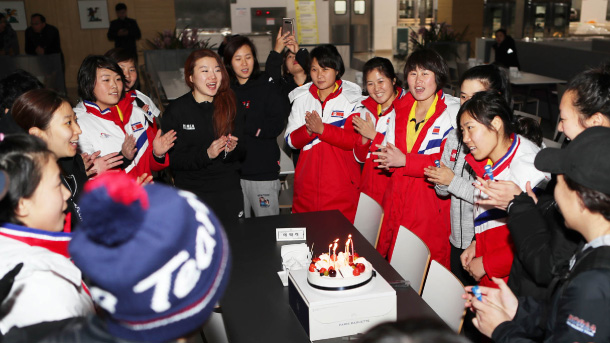 Female ice hockey players from both North and South Korea celebrate the birthday of a North Korean player on Sunday at Jincheon National Training Center in North Chungcheong. [YONHAP]

Citizens of China and some Southeast Asian countries will not need a visa to travel to South Korea during the PyeongChang Winter Olympics, the government announced Monday.

The visa waiver program will apply to Chinese nationals who purchase at least 200,000 won ($187) worth of tickets for the Games, which last from Feb. 9 to 25, as well as Indonesian, Vietnamese and Philippine nationals who arrive in the country in groups of five or more people.

They will be allowed to stay for 15 days without a visa.

The main press center of the organizing committee said on Monday it did not know whether the waiver program will also be applied to the Paralympics, which will last from March 9 to 18.

The decision was reached in the latest policy coordination meeting, the first in 2018, participated in by high-level government officials as well as members of the Blue House and ruling Democratic Party.

Local authorities also decided to lift tolls at eight highways leading to cities where Olympic-related events will be held, and to offer discounts on agricultural and marine products to customers with KTX bullet train tickets on the Gyeonggang line, which crosses the country from Incheon International Airport to Gangneung, one of three places in Gangwon where the Games will be hosted.

Democratic Party chairwoman Choo Mi-ae urged the opposition bloc not to disparage the government’s efforts to hold the Olympics, while Prime Minister Lee Nak-yon vowed that the Winter Games, held just 100 kilometers (62 miles) from the Demilitarized Zone (DMZ), will be the “greatest festival in the history of all Winter Olympics.”

In response to last week’s Miryang blaze, which left at least 39 people dead, the government has also agreed to carry out a massive overhaul of hospitals and public facilities nationwide from next Monday to the end of March, and devise a safety plan to prevent any recurrences.

Some 290,000 establishments will be subject to the inspection.