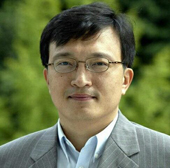 “After spokesman Park, who laid a stable ground in the government’s communication with the people since its inauguration, Kim is expected to responsibly carry out the duty of communicating with the people in a trustworthy manner,” Yoon said.

A native of Gunsan, North Jeolla, Kim graduated from Korea University and then joined the liberal newspaper in 1990, where he worked as reporter on the city and political desks.

The scandal ultimately led to Park’s ouster from office and her incarceration.