With the 2018 PyeongChang Winter Olympics fast approaching, Korean short-track speed skating star Shim Suk-hee is facing an ordeal that no athlete should have to deal with after being struck by her own coach during training about two weeks ago, leading to the instructor’s lifetime ban from the sport. 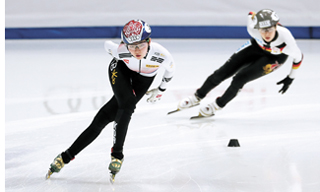 Shim briefly left the team at Jincheon National Training Center in Jincheon, South Chungcheong, some 90 kilometers (56 miles) south of Seoul, but has since rejoined her teammates for the Feb. 9-25 Olympics.

How Shim will fare in her second Olympics will depend less on her physical skills - which are abundant - than on her mental fortitude. Can Shim, who celebrates her 21st birthday on Tuesday, regroup mentally in time to add to her collection of three Olympic medals?

Shim is the women’s team captain for PyeongChang. Four years ago at the Sochi Winter Games, she was the youngest on the squad but demonstrated poise and skill that were well beyond her years.

She anchored the 3,000-meter relay team to the gold medal with an exhilarating charge over the final lap, while adding a silver in the 1,500 meters and a bronze in the 1,000 meters.

Shim won the world overall championship a month after the Sochi Olympics, and she and her teammate Choi Min-jeong have dominated women’s short-track over the past couple years.

Shim is a fluid skater who can kick into another gear almost at will. Choi has pushed Shim hard in recent years, and their budding rivalry within the national team could well lead to a Korean gold medal sweep at PyeongChang 2018.

Shim has been a sensation every step of the way. As a middle school student, she grabbed two gold medals at the 2012 Youth Winter Olympics and won the world juniors overall title that same year.

She made her senior debut in the 2012-2013 season and captured 10 gold medals at six World Cup stops, including all six titles up for grabs in the 1,500 meters. Shim hasn’t looked back since.

In addition to her off-ice issues, Shim has to be wary of her Chinese rivals on the ice - namely, their penchant for questionable physical contact during races.

Shim has fallen victim herself. During the 500 meter final at the 2017 Asian Winter Games in Sapporo, Japan, Fan Kexin of China was seen grabbing Shim’s right knee with her left hand during the final lap. Somehow, both skaters were disqualified.

But Shim didn’t complain afterward, saying instead that she simply has to avoid being in a situation where rival skaters could make contact.

It’s difficult to say what’s going on through Shim’s mind, only days removed from the disturbing incident. But during a Team Korea launching ceremony last Wednesday in Seoul, her first public appearance since the incident, Shim was seen sharing laughs with her teammates and taking selfies with them.

Shim declined to speak to reporters after the event, but the national team head coach, Kim Sun-tae, said Shim will be just fine.

“As Shim is an athlete with a strong sense of responsibility, she does not want (the team) to be affected because of her,” Kim said. “Shim is pulling herself together well and is practicing hard with purpose.”