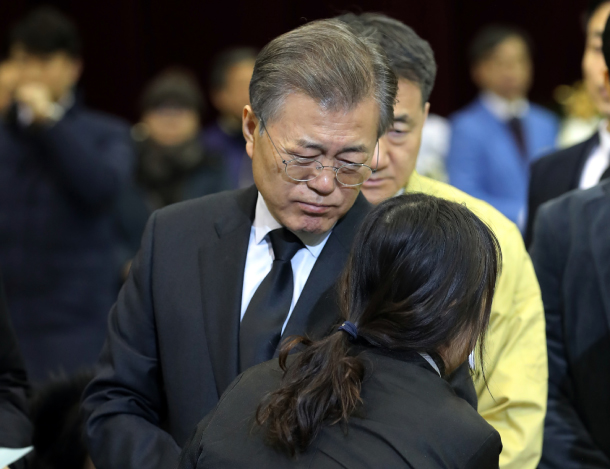 President Moon Jae-in consoles families of victims who died in a fire last week at a hospital in Miryang, South Gyeongsang. The blaze took 39 lives and injured 151. [JOINT PRESS CORPS]

A month ago, I wrote a column on how hard it was to live as a Korean citizen. We are tired of having to be vigilant and informed to dodge all the risks around us. It is hard to live because people often don’t fulfill their duties.

But it turns out that it is not only the people who are having a hard time. Being a leader is even harder. It might seem natural since our leader is also a Korean citizen, but he is expected to do far more than an average citizen. He is expected to rush to the site of incidents and make an apology. He looks sad and shows tears. If his arrival at the scene is delayed, he suffers criticism.

He also has to face attacks from opponents. Those who are no better condemn the president as if they are waiting for mistakes. They harshly demand a scapegoat. They are not entirely wrong since the administration certainly benefited from the past government’s irresponsible handling of the Sewol ferry tragedy. Naturally, people expect more efforts on disaster prevention.

However, man-made disasters continue. A fishing boat capsized in waters off Incheon and fires broke out in Jecheon and Miryang. The wisest plan is to appear at the scene at once and apologize.

Nevertheless, we need to be calm and look at the situation straight, especially as citizens of this country living with all the dangers. Those who blame disasters and accidents on the administration are irresponsible and groundless. They are more likely to have few plans for the future. If they had any ideas, why would they only point fingers? Are they saving these measures until they take power? It is no time to pay attention to their lies.

Yoo Seong-min, leader of the opposition Bareun Party, said that politicians must take responsibility for all problems, but that’s not all. Citizens are also responsible. In the end, we are to blame. It is as if we are living in a minefield. The entire nation is the Sewol, and every one of us is captain of the ship. If all members fulfilled their duties, we wouldn’t have so many disasters.

However, many of us are insensitive and irresponsible. We neglect our duties while unlawfully seeking self-interests. Negligence is happening all around us, not just on boats, fitness centers and hospitals. Small accidents that can happen often lead to tragedies more serious than natural disasters.

In Plato’s “Republic,” Thrasymachus argued it was better to do unjust things and offer sacrifices to the gods. If people do the right thing, they won’t get punished by the gods; they will only miss gains. In doing unjust things, they can take the gains and offer a portion to the gods for immunity.

But the gods are not easy to trick. People are taking a chance avoiding accidents, and if a day goes by without an accident, you are just lucky for that day.

We cannot expect to be lucky all the time. In the end, we will face tragedy more devastating than death. In Yoon Dae-nyeong’s novel “House of Clowns,” he stresses the importance of relationships through a reconstructed family of people who are hurt. “People who cannot take care of themselves will have to helplessly watch others making sacrifices for them,” the mother says, “even at a moment when the person who saved them is criticized for the sacrifice.”

This is what we need to listen now. Those who don’t fulfill their duties are not only helpless but can even hurt those who help. And you may be one of them.