An aging Korea is moving around less

An aging Korea is moving around less 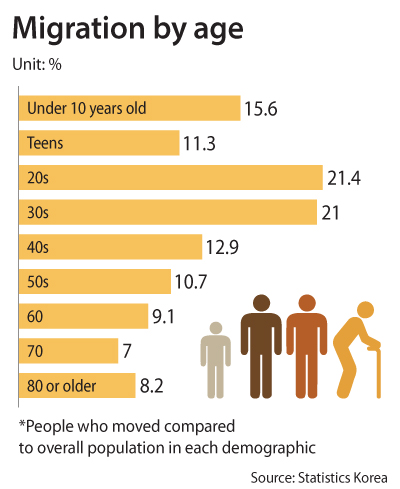 Migration between Korean cities and provinces reached a 40-year low in 2017, according to the latest data released Tuesday by Statistics Korea.

Seoul continued to see a net outflow of residents, following a near three-decade trend, and the once-bustling port city of Ulsan suffered brain drain for a second straight year as its main industries - shipping and shipbuilding - struggle to bounce back from a global order drought.

On the other hand, the province of Gyeonggi enjoyed a net inflow, thanks to a factory boom and tech companies moving their headquarters to districts like Pangyo. The city of Sejong, to where many government offices have relocated, continued to see growth.

According to Statistics Korea, nearly 7.2 million Koreans relocated to another city last year, representing the lowest figure in decades. The last time migration dipped below this level was in 1976, when only 6.77 million people moved.

The country’s biggest cities saw the most residents leaving. Seoul topped the list with 98,000, followed by Busan with 28,000 and Daejeon with 16,000. Seoul and Busan especially have been suffering net outflow for at least the past five years, with Seoul experiencing a net exodus for the past 28 years.

Incheon, which has been seeing a net inflow of people since 2005, newly joined the group of cities that witnessed a net outflow.

Gyeonggi was ranked at the top in terms of net inflow of people with 116,000 new residents, followed by Sejong with 35,000 and South Chungcheong with 19,000.

Ulsan, once the country’s center for heavy industries, saw a net outflow of 12,000. Restructuring in the wake of a post-crisis order drought led to the mass layoffs in the city.

While young people in their 20s continued to migrate to Seoul, those in their 30s, 40s and 50s left.

Statistics Korea said the key factor for low migration was an aging population reluctant to move around, but in the case of Gyeonggi and Sejong’s boom, the biggest reason was high real estate values. These two regions are seeing more job opportunities and improved infrastructure that allows for shorter commute times to Seoul