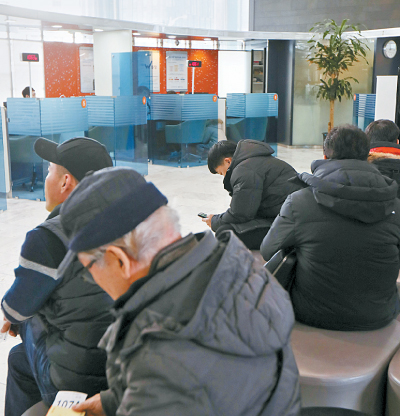 Customers wait for service at the headquarters of the Industrial Bank of Korea, which started issuing cryptocurrency accounts, in central Seoul on Tuesday. [YONHAP]

But the new measures did little to rally a market that has floundered for weeks due to contradictory signals from authorities.

The measures were announced on Jan. 23 and prohibit anonymous accounts being used for bitcoin trading. As a result, anonymous accounts - basically temporary accounts tied to the corporate accounts of cryptocurrency exchanges that did not require identity verification - were closed as of midnight Tuesday.

Since Jan. 1, anonymous accounts were basically frozen and it was hoped that the measures coming into effect Tuesday would boost the market because new accounts would finally be allowed.

Under the new measures, users of an exchange must conduct transactions through banks that the exchange has partnerships with. For instance, NH Nonghyup Bank and Shinhan Bank are the partners of Bithumb, which means Bithumb users can only use accounts registered in their real names at the two banks to buy and sell bitcoin.

If a person who used to trade through an anonymous account at Bithumb does not have an account at NH Nonghyup or Shinhan, he or she must open an account and go through an identification process to resume trading.

“To obtain identity verification at Bithumb, a user must have an account at NH Nonghyup or Shinhan,” said a spokesperson from Bithumb.

Upbit, one of the largest exchanges in the world, has contracts with the Industrial Bank of Korea, and Coinone, another major platform here, has partnered with NH Nonghyup.

Local banks expected a sudden rise in customers on Tuesday, but bank branches did not experience that.

“We have been monitoring some of the main branches all day but we didn’t see a sudden spike in customers,” said a spokesperson from NH Nonghyup.

Industry insiders said that although banks allowed existing investors to undergo a verification process and trade as usual, they remain reluctant to issue accounts to newcomers.

“Banks are cautious and have yet to decide how many new accounts to issue to exchanges,” said a manager at a local exchange. “The government said it will blame the banks if anything goes wrong in cryptocurrency trading.”