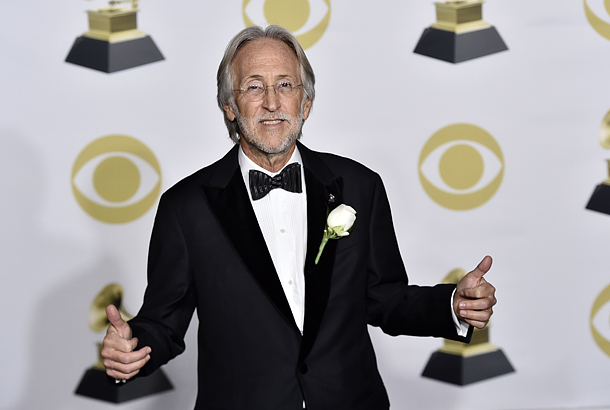 President of The Recording Academy Neil Portnow poses in the press room at the 60th annual Grammy Awards on Sunday, Jan. 28, 2018. [AP/YONHAP]

Recording Academy President Neil Portnow is facing criticism for his comments after the 60th annual Grammy Awards ended with only two female winners on stage and lingering questions about the choice of performers.

Following the awards Sunday, many fans and critics questioned whether the Time’s Up movement was just given lip service when the only woman nominated for album of the year, Lorde, didn’t perform. Instead, multiple minutes were given to male artists who weren’t nominated, such as Sting and the band U2.

While the red carpet was filled with artists sporting white roses to symbolize support of gender equality, after the show wrapped Portnow was questioned about Lorde’s absence from the stage, as well as the fact that only two women were shown on TV accepting awards.

“It has to begin with women who have the creativity in their hearts and their souls, who want to be musicians, who want to be engineers, who want to be producers, who want to be part of the industry on an executive level, to step up,” Portnow said backstage after the show. “Because I think they would be welcome. I don’t have personal experience of those kind of brick walls that you face. It’s us as an industry making a welcome mat very obvious - creating mentorships, creating opportunities for all people who want to be creative, and, really, paying it forward, and creating that next generation of artists who feel like they can do anything, say anything.”

Criticism for Portnow’s comments was swift. Grammy-winning singer Sheryl Crow tweeted Monday: “I wish the Grammys would return to female/male categories. Who will young girls be inspired by to pick up a guitar and rock when most every category is filled with men? I’m not sure it is about women needing to “step up,”[as said by the male in charge].”

There were no women nominated in the record of the year category and the only male to be nominated in the best pop solo performance, Ed Sheeran, won. Alessia Cara won best new artist and Rihanna also got to take the stage when she and Kendrick Lamar won best rap/sung performance.

As for why Lorde didn’t get to perform solo, Portnow said, “We have a wealth of riches every year and it’s hard to have a balanced show and have everybody involved. Every year’s different. We can’t have a performance from every nominee. We have over 80 categories. And so we have to realize that we’ve got to create something that has balance and so on and so forth, and what you saw was our best judgment on how to do that.”

As for Lorde, she seemed to address the controversy when she tweeted Monday morning, “If you’re debating whether or not I can murder a stage... come see it for urself.”